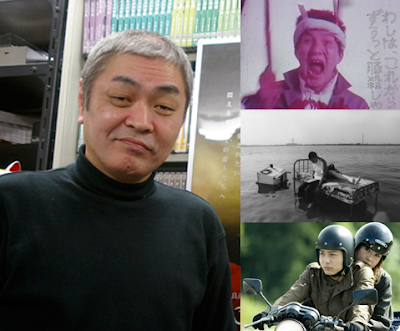 The world of independent film-making in Japan has produced some remarkable artists -- Hiroshi Teshigahara, Susumu Hani, Shuji Terayama and Shinya Tsukamoto to name only a few. These directors created works that have both captivated and provoked audiences, but the work of one independent film-maker has set a high watermark for both innovation and in some cases outrage. That is Yoshihiko Matsui. Born in 1956 in Nishinomiya, Hyogo, Matsui began his career working with fellow indie film-maker Sogo Ishii in the late 70's on Ishii's debut feature film "Crazy Thunder Road". Around the same time Matsui was making his own debut film, 1979's "Rusty Empty Can", a work inspired in part by Matsui's artistic icon, Shuji Terayama. This was followed up in 1981 by "Pig-Chicken Suicide", a film that combined the story of two young Koreans in Japan with images of animal slaughter and sexuality. Matsui would continue to confront audiences with his next film, 1988's 3-hour surreal masterpiece "The Noisy Requiem". Even though its lead character, a serial killer who gouges out women's genitalia and deposits them into his wooden mannequin girlfriend, caused a firestorm of controversy the film would go on to pack Tokyo's Nakano Musashino Hall Theatre during its first theatrical run. The success (or infamy) of "The Noisy Requiem" didn't see Matsui rushing to make a follow-up though. Matsui would take a 20-year break from directing before bringing the world "Where Are We Going?" (2008), a road movie/ love story involving a murderer and a transsexual. It's obvious that this two decade break had not in any way softened this indie auteur. CM


1. What movie inspired you to become a film-maker? What was it about the movie that was inspiring?

There are two movies and directors who inspired me a lot. Shuji Terayama is the director who made made me make up my mind to enter the movie world. The poetic world in Terayama's "Pastoral: To Die in the Country (Den-en ni shisu)" was wonderful. I was 18-years-old in those days, I watched this artistic movie for the first time and it made a huge impression. Also Federico Fellini's "Satyricon". He let the poetic world and the artistic world fuse. It was a very wonderful movie. I had a feeling of respect towards Fellini for creating it. After I first saw it I forgot to stand up from my seat because it was too much of an impression for a while. I was floating in tears. Of course there are many splendid movies in the world, but Terayama and Fellini are the movie directors who I can never forget it in my movie life.


2. Is there someone you always wanted to work with on a project, but have never had the chance?

A farmer or a painter.


4. Which three people (besides film-makers) have had the biggest influence on you?

It's a very difficult question for me, but... Leonardo da Vinci, Paul Cezanne, Peter Tchaikovsky.

This is another difficult question. I cannot answer. I'm sorry.


6. What moment in your career has made you most proud so far?

It was when my movie “Where Are We Going?” was shown at the Moscow International Film Festival in 2008. This was because of a director whom I love and respect -- Akira Kurosawa. Kurosawa had a period where he was unable to make a movie. At that time, Russia (the Soviet Union) asked him to make a movie. That movie, “Dersu Uzala” won the grand prix at the Moscow International Film Festival, and then my movie was projected on the same screen that showed ["Dersu Uzala"]. This was a very nice thing for me and was very memorable. Furthermore, it was impressive to me that I gave a speech there. Of course there were a lot of wonderful things for me, but it's this that I remember immediately.