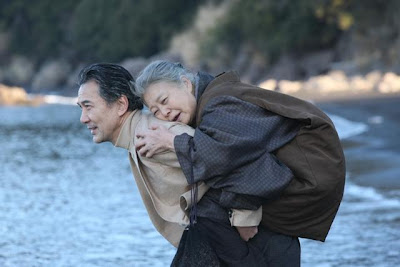 The Toronto International Film Festival wasn't the only festival in Canada announcing Japanese titles in their line-up this week. Montreal's 35th World Film Festival announced two Japanese films in their line-up, one by a pink film-maker who has been making some major critical waves recently, and a film-maker who has been out of the limelight for the past three years.

This year's Montreal World Film Festival will present the world premiere of Takahisa Zeze's “Antoki no Inochi”. Zeze, who has recently been appearing on critic's radar with his 4-hour plus drama "Heaven's Story", adapts “Antoki no Inochi" from a novel by singer Masashi Sada. The film stars Masaki Okada as a young man who suffered a tragedy in high school and now lives a marginalized existence. This changes when he meets a young woman, played by Nana Eikura. Check out teaser trailer for "Antoki no Inochi" below.

Along with "Antoki no Inochi" the Montreal World Film Festival will be screening the world premiere of Masato Harada's “Waga Haha no Ki”. Based on the autobiographical novel by Yasushi Inoue “Waga Haha no Ki” tells the story of Inoue's as he struggles with his mother's old age and dementia. Koji Yakusho stars in the role of Inoue while Kirin Kiki stars as his mother. "Waga Haha no Ki" marks the first time since 2008's "Climber's High" that Masato Harada has helmed a feature film.

Both "Antoki no Inochi" and "Waga Haha no Ki" will be competing for the top prize at this year's Montreal World Film Festival, a prize that has historically carried a lot of weight with Japanese audiences and critics. For a full look at what will be screening in Montreal between August 18th to 28th just click here. Thanks to Tokyo Hive and Tokyograph for the details on this.