Camera Japan Festival goes into full swing in The Netherlands 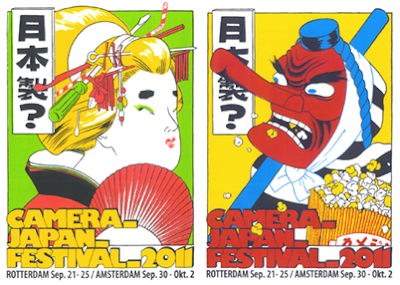 Back in August we reported on how the Camera Japan Festival was going to be touring seven cities in The Netherlands -- Rotterdam, Amsterdam, Den Haag, Groningen, Breda, Leiden and Tilburg -- through September and October. The 6th offering of the festival kicks off tomorrow with yet another amazing line-up.

Camera Japan boss and programmer Alex Oost has once again outdone himself with a batch of films that covers everything from mainstream crowd-pleasers such as "Gantz" and "The Abacus and the Sword", through indie hits like Satoru Hiroharu's "Good Morning to the World!!" and Naoko Ogigami's "Toilet", and even new anime features "Redline and "Time of Eve".

If you live in The Netherlands and love Japanese film then head to the official website for the Camera Japan Festival and start planning your movie-going!
Posted by Chris MaGee at 7:16 PM