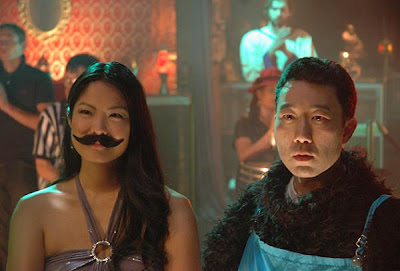 The grandfather of all Asian film events in Toronto, The Toronto Reel Asian International Film Festival, has been bringing the best in Asian cinema to the city since 1996. To celebrate their 15th anniversary Reel Asian will be presenting a FREE screening of Dave Boyle's 2009 comedy "White on Rice" on Saturday, September 24th at 7:00PM at Toronto's Underground Cinema (186 Spadina Ave.)

"White on Rice" follows Jimmy (Hiroshi Watanabe), a small time Japanese actor who falls in love with the beautiful Ramona (Lynn Chen) while seeking advice from and sharing a bunk bed with his 10-year-old nephew. Reel Asian featured "White on Rice" as part of their line-up two years ago, and it really captured the audience's hearts, so this is a great opportunity to catch it again... and for FREE.

As with most free screenings make sure to get to the theatre early as tickets will be issued on a first come/ first serve basis. For more on the 15th offering of the Toronto Reel Asian International Film Festival, taking place between November 8th and 13th, click here.