New Mexico to get a screening of experimental vampire horror film... with live soundtrack 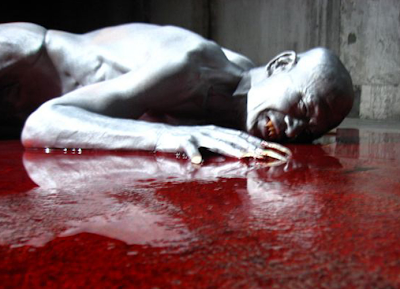 We report on Japanese film screenings and events all over the world -- in Japan, the UK, the US, Germany, Brazil, Australia and of course across our home turf of Canada. One place we don't mention a lot is New Mexico, but we should. That's because the southwest state is home to Tidepoint Pictures, a very cool DVD label that specializes in indie and art films from Japan.

Tetsuki Ichiji, the man behind Tidepoint, has organized a very interesting screening for November 12th at Albuquerque, New Mexico’s KiMo Theater (423 Central Ave. NW). That night the spirits of the undead will invade the KiMo with the World Premiere of Naoki Yoshimoto’s "Sanguivorous", an experimental vampire film about a woman descended from a line of vampires, and starring veteran butoh dancer Ko Murobushi. A butoh-inspired vampire film isn't enough of a reason to get you out to the theatre? Then how about if the film is screened with live musical accompaniment? That's exactly what Ijichi and the KiMo Theater have planned. A specially commissioned score for the film will be performed in the theatre by percussionist Tatsuya Nakatani and saxophonist Edward Wilkerson, Jr.

We know November 12th is a ways off, but check out the extended trailer for Naoki Yoshimoto’s "Sanguivorous" to get yourself psyched for this do-not-miss screening. For more details on the event visit the KiMo Theater 's website here.