REVIEW: Night on the Galactic Railroad 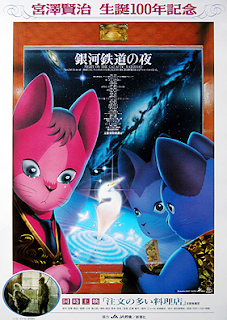 A pair of cartoon cats leave their quaint little village and embark on a journey that sees them riding a magical train into outer space. If you are a parent and found yourself at your local video store or surfing NetFlix and read that synopsis you'd grab the DVD pretty quickly for your young children, wouldn't you? Probably, but I am certain that neither you nor your kids would be ready for the mind-bending time/ space trip that propels Gisaburo Sugii's 1985 animated film "Night on the Galactic Railroad". That's not to say that these two traveling felines indulge in anything inappropriate for a children's film. Not at all. "Night on the Galactic Railroad" is entirely violence, sex and fright free. What it has plenty of are moments that will leave you puzzled, whether that's in a good way or a bad way depends on the viewer. But I've gotten way ahead of myself. A little more information would be good...

"Night on the Galactic Railroad" does indeed follow the adventure of Giovanni, a boy (or kitten), who is dealing with a lot for someone so young. His explorer father may have gone missing on expedition to the North country, while Giovanni's mother is ill and confined to her bed. To help make ends meet Giovanni has taken a job as a typesetter at the local newspaper. This doesn't leave him with much energy for his school work, so when he's called upon in class to explain why the Milky Way is called "milky" Giovanni draws a blank. His best friend Campanella steps in but flubs the answer as well, probably to help Giovanni save face. So what is a boy (or kitten) like Giovanni to do? All he can do is stare up at the Milky Way in the night sky ("milky" because of the white light of billions of stars) and tend to his sick mother. It's this latter task that takes him to the local dairy to pick up milk and it's outside the dairy that Giovanni lays for a moment on a grassy hilltop only to have a locomotive barrel down out of the sky and take him on a tour of the same Milky Way that vexed him in class that day. 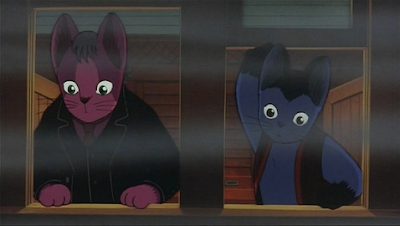 Again, "Night on the Galactic Railroad" sounds like a perfect kids adventure, but while the story itself sounds charming it's the execution of veteran anime director Gisaburo Sugii and author, essayist, critic and screenwriter Minoru Betsuyaku (who also scripted Yoshishige Yoshida's New Wave classic "Coup d'Etat") that really takes it to another world. "Night on the Galactic Railroad" is based on the beloved 1927 novel by author, poet and teacher Kenji Miyazawa. The original book was apparently inspired by the death of Miyazawa's younger sister in 1922. It was while taking a train trip to Japan's northern most island of Sakhalin that Miyazawa began working on the story of Giovanni's trip to the heavens. He spent the next nine years working on the novel, but it remained unfinished at the time of Miyazawa's death in 1933. Director Sugii doesn't shy away from the ever-present shadow of death in his animated adaptation of Miyazawa's book. Giovanni's mother is depicted as a disembodied voice that emanates from behind a locked door. Once Giovanni has hopped aboard the Galactic Railroad he soon discovers that it is peopled by the spirits of children who died in a Titanic-like sea-going disaster, and that the train's route takes it past the giant crucifix of the constellation, the Southern Cross. This is a gateway to Heaven in the story, a place where blessed souls go to reside.

It's not just major hints of mortality and religion that make "Night on the Galactic Railroad" such an odd kids' movie though. There is an overall mood (reinforced by an eerie synth soundtrack by former Yellow Magic Orchestra member Haruomi Hosono) of nocturnal mystery and borderline dread. The cute cat characters are juxtaposed with images of giant black globes hurtling through the void of open space, train conductors who materialize and dematerialize out of thin air and the skeletons of ancient cattle which float like whales in the sky. It's the cute cat characters that are the strangest thing about "Night on the Galactic Railroad" though. Giovanni, Campanella and the rest of their fellow townsfolk were all human in Miyazawa's original book. Why the producers of the film thought that it would be better to represent them as anthropomorphized cats is hard to say, but it's a choice that makes the film all the more mystifying. Had Sugii and Betsuyaku simply chosen to feature Giovanni and Campanella as two boys there would have been a clearer division between Giovanni's waking life and dream life; but instead the entirety of "Night on the Galactic Railroad" takes on majorly surrealistic tones. As I watched "Night on the Galactic Railroad" I couldn't help being reminded of Seijun Suzuki's utterly confounding and absolutely fascinating "Taisho Trilogy" of films (1980's "Zigeunerweisen", 1981's "Kagero-za" and 1991's "Yumeji"). These films rejected "normal" cinematic and narrative logic and embraced full on fantasy and surrealism. "Night on the Galactic Railroad" does the same. What helps us viewers is that little Giovanni is as perplexed and wonderstruck as we are sitting in the audience. His default facial expression throughout the film is wide-eyed and mouth agape; appropriate to a boy who finds himself either in a waking dream or a trans-dimensional journey to the outer arm of the galaxy... or both. Giovanni is never really sure and neither are we.

In the end, it would be a huge mistake for parents or kids to pick up "Night on the Galactic Railroad" and think they are renting a cute cartoon animals film. It might sound strange, but if you can rent one of Suzuki's aforementioned "Taisho Trilogy" films, as well as, say a 1960's film by Federico Fellini, then Gisaburo Sugii's "Night on the Galactic Railroad" would make the perfect third film for an all night surreal/ art film marathon.
Posted by Chris MaGee at 6:15 PM