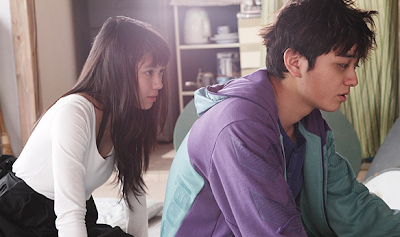 While Toronto film audiences are still waiting for the North American premiere of Sion Sono's live-action adaptation of Minoru Furuya’s manga "Himizu" and Shinya Tsukamoto's thriller "Kotoko" audiences in at the 68th Venice International Film Festival have already had a chance to see both. The result is that each film has picked up awards.

Shinya Tsukamoto has bounced back wonderfully from the disappointing response to last year's "Tetsuo the Bullet Man" by having his latest film "Kotoko" pick up the Orizzonti Award for feature film at Venice. "Kotoko" delves into the mind of a young mother, played by singer/ songwriter Cocco, who suffers a nervous breakdown.

Meanwhile, 19-year-old Shota Sometani (above right) and 16-year-old Fumi Nikaido (above left) have both won the Marcello Mastroianni Award for Best New Young Actor or Actress for their portrayal of two teens dealing with traumatic pasts and an uncertain present in post-Tohoku Earthquake Japan.

Since his big screen debut in Fumihiko Sori's 2002 film "Ping Pong" Sometani has delivered some very well-received performances, most specifically in Koya Yoshida's "Yuriko's Aroma" and Natsuki Seta "A Liar and a Broken Girl". Fumi Nikaido is still a relative newcomer, but has already wowed audiences with her portrayal of the daughter in Koji Yakusho's 2009 directorial debut "Toad's Oil".

Congratulations to Tsukamoto, Sometani and Nikaido, and thanks to Anime News Network for this news.
Posted by Chris MaGee at 8:50 PM

The result is that each film has picked up awards.
meizu
xiaomi mi4i
xiaomi redmi note 2