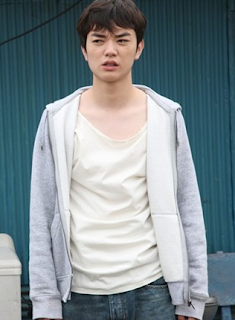 After seeing Sion Sono's latest film "Himizu", my first thought was to write the entirety of its review in UPPER CASE. This would help get across the intensity of just about every single moment of this 2+ hour look at the state of Japanese society a short time after the March 2011 earthquake and devastating tsunami. Not only do the characters YELL and SCREAM a great deal in the film, but every interaction and even every pause for self-reflection is imbued with what seems to be a vast amount of gravitas. This is melodrama to the absolute highest possible degree as the backing repetitive music ebbs and flows and builds to crescendos matched with the characters emotions. Even the backing sound effects get in on the action as screeches, staccato static and particularly rumbling sounds permeate the film. During scenes where the tension has built to an almost explosive point, the deep rumbles feel like an earthquake has just unleashed waves of destruction that will crash to shore very soon.

The destruction of the tsunami is apparent right from the beginning as the camera pans across mounds and mounds of rubble - an amount so large that it is obviously actual wreckage from the disaster. The camera eventually settles on 14-year old Sumida who runs his parents boat rental store. It's ramshackle, but certainly in far better shape than the huts that have sprung up near the store which are populated by several people who have lost everything in the torrents of water. These people are scarred almost as bad as the landscape, occasionally taking to walking out to the middle of the worst of the rubble and screaming. Back at their shacks they find a bit of solace with each other by drinking and looking out for Sumida. His mother is a whore and his father stops by regularly to beat him up and take whatever money he has. Neither parent cares for him and his father just flat out tells him that things would have been better if he hadn't been born and that he should really think about killing himself. 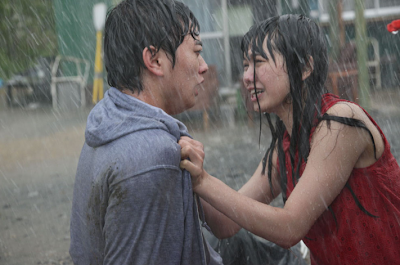 If that's not pitched high enough for you, then Keiko's situation may help put things over the top. She's completely smitten with Sumida and sees his random comments in class as deep thinking which she plasters all over her walls. Her house is in much better shape, but her living conditions sure aren't. Her father is non-existent and her mother - when she isn't berating her - is building Keiko a gallows in her room. The noose is in place and her mother has made Keiko promise to use it on herself as soon as it's finished. She begins to impose herself on Sumida, playing silly games, putting up flyers for the boat shack and helping without him asking. All Sumida wants is to live an ordinary life - no happiness, no unhappiness. Once his mother leaves him, he's left to deal with his Dad on his own and once the yakuza show up claiming that his father owes them 6 million yen, it pretty much becomes the last straw. His neighbours want to help and Yoruno (the eldest of the bunch) actually gets involved in a robbery scheme to attempt to repay what he considers Sumida's kindness.

The music, the frequent use of handheld cameras and the ratcheting up of tension at every opportunity all lead the viewer to assume that things aren't going to improve anytime soon and will likely coalesce into an explosion of some variety. Sumida realizes that he must do some good on this planet and he decides to do this by ridding it of those people who do bad. The story is based on a manga of the same name ("Himizu" is a type of mole - an animal that Sumida wishes he could be so that he could be left alone), but the film is Sono's. It's filled with rage and confusion and anger and the disaster is never far from anyone's thoughts - but Sono uses this to convey his message. It's a simple one: Don't give up, don't ever give up, always have a dream and keep pushing forward. How much you'll enjoy the film is hard to say as it can try your patience with its remarkable intensity, but its message is clear and easily embraced.

Read more from Bob Turnbull at his blog.
Posted by Chris MaGee at 8:34 PM

By using RentalCars you can find cheap car hire at over 49000 locations across the globe.