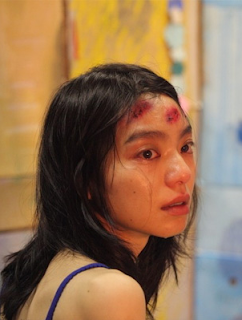 I don’t think "Tetsuo: The Bullet Man" was the film we where waiting for, but with that kind of anticipation building over such a long period of time, I’m sure it would be difficult for most films to meet those kind of expectations. I liked it more than most I think, it still had some really amazing moments, but it was filled with very unnecessary exposition and some horrendous acting. But if that film served one supreme purpose, it was more to mark the end of a chapter in Tsukamoto’s career. "Kotoko" serves as both a nexus point of ideas and themes from some previous films, but also a new direction Tsukamoto seems to be taking with his work.

Kotoko (pop star Cocco in her first starring role) is a young mother struggling to raise her young son Daijiro. Her grip on reality is shaky at best. Through her narration we quickly learn she see’s double of everyone, one good and one evil. The problem is she can’t tell which one is real, and is constantly moving from apartment to apartment as she assaults neighbours she fears are out to harm her or her baby. Every moment of her life devolves in to paranoid induced state, where she worries what tragedy awaits her son. She cuts herself in an effort to remind her that she is real, and what she’s experiencing is not a dream or delusion. The only time she feels at peace, when all her anxiety melts away and she feels whole, is when she sings. Soon Daijiro is taken from her, as authorities believe she is in fact abusing her child, and place him in the custody of her sister. At the same time, a famous author (played by Tsukamoto) who hears Kotoko’s singing on a bus begins to stalk her, mesmerized by what he hears. He follows her around, desperate to strike up a relationship with her, no matter what the emotional or physical cost it may have on him or her. 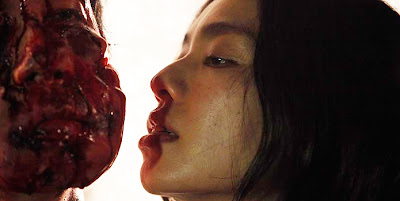 "Kotoko" is on the one hand strikingly familiar in its visualization of Kotoko’s descent into delusion, and yet so very different from what we’d expect from Tsukamoto. Having truly embraced the digital technology he’s now used on a few films now, including "Haze" and "Tetsuo: The Bullet Man", Tsukamoto creates a more naturalistic approach to much of the film. Instead of the very processed look found in "Bullet Man", and they very theatrical staging, everything appears very real and immediate. When Kotoko is with her family, the camera uses long takes and a verite style to capture the heartfelt interaction between Kotoko, her son and her sisters family. The scenes appear to unfold naturally, with very little staging. Nothing seems forced, and the movements of the players don’t seem nearly as theatrical or expressionistic as some of Tsukamoto’s other work. When Kotoko sings, bringing her world into a state of peace, we are treated to one shot numbers of Kotoko in a raw and vulnerable state, something that would have been far more difficult to do had he been using film.

The sound design by Masaka Kitada, who did "Nightmare Detective" and "Vital", retains much of the similar assaultive sensibility we’ve come to expect, but the score by Chu Ishikawa is absent, instead Tsukamoto having collaborated on a grand scale with star Cocco. Incredibly moved and inspired by her work (he shot a 24 minute short last year built around 3 of her songs that is cinematically very similar to parts of "Kotoko"), Tsukamoto had Cocco not only help him design the character of Kototo and the ideas around which some of the film is based (the double vision was her idea), but she serves as the production designer and does the film score.

Cocco, much like those long takes of her singing, gives a raw performance, and Tsukamoto creates a far more organic and naturalistic film that explores anxiety and paranoia in the context of motherhood. It’s touching and moving, but equally disturbing and violent. If anything, it continues a direction Tsukamoto started with "A Snake of June" and "Vital" and even to some degree "Haze", but channels a new approach to some familiar subject matter, swapping the oppressive nature of the city with the paranoia of impending violence. Underlying all this is one common theme that runs through all this films, physical expression, transitioning from the usually body horror and violence, into the beauty of song and dance.

Read more by Matthew Hardstaff at his blog.
Posted by Chris MaGee at 7:30 PM

Start following our trades NOW & gain up to 270% daily.