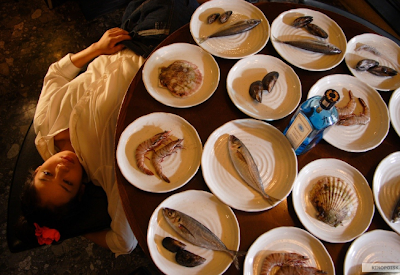 Earlier this year the programmers of the Starz Denver Film Festival were hard at work putting together a mini programme of Japanese films under the title of "Focus on Japanese Cinema, Art, & Culture". Then, on March 3rd the Great Tohoku Earthquake and Tsunami occurred and suddenly the future of the programme came into question. Due to the resulting tragedy the Denver Film Festival decided to cancel the programme, but now, over six months after the earthquake and tsunami, "Focus on Japanese Cinema, Art, & Culture" is being resurrected for Denver, Colorado movie audiences.

During the 34th Starz Denver Film Festival, running from November 2nd to 13th, classic and contemporary Japanese films ranging from Mamoru Oshii's "Ghost in the Shell" and Shohei Imamura's "Ballad of Narayama" to Koji Fukada’s "Hospitalité" and Minoru Kurimura's "Food and the Maiden" (above) will explore aspects of Japanese film and culture. You can check out the full list of films in "Focus on Japanese Cinema, Art, & Culture" (as well as the rest of the Starz Denver Film Festival" by clicking here.
Posted by Chris MaGee at 9:46 AM