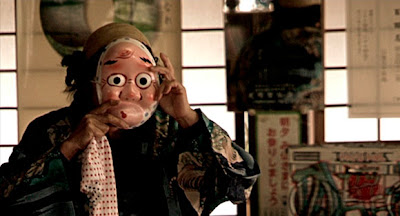 While Toronto is gearing up for the 15th annual Reel Asian International Film Festival and Tokyo is getting ready for the 24th Tokyo International Film Festival our friends in London are preparing for one of the city's most exciting film events on its calendar. That would be the 2nd annual Zipnagu Fest, running at the Institute of Contemporary Arts between November 18th through the 24th.

Recently Zipangu Fest programmer and director Jasper Sharp announced that this second offering of the festival will be kicking off with a cinematic and aural extravaganza on Novemebr 18th. That night Zipangu audiences will be able to catch the UK premiere of Neil Cantwell and Tim Grabham's engrossing and gorgeous documentary "KanZeOn: The Magical Potential of Sound". This film, which traces the work of three Japanese musicians who mix the ancient and the modern in their work, was a huge hit at this year's Shinsedai Cinema Festival where it received its world premiere. Those attending this UK launch will get to enjoy a lot more than just the film though.

As part of the Zipangu Fest launch "KanZeOn" will be followed by a party with a whole crew of musical guests. Those include Buddhist priest and beat-boxing DJ Ta2Mi (featured in "KanZeOn"), and DJs KidKanEvil, Laurent Fintoni, Shi_Ne_Ko_Sei and Amoeba.AV. Really a night that should not be missed!

You can get more details on this year's Zipangu Fest at its official website here as well as at its Facebook page here.
Posted by Chris MaGee at 11:28 PM

There is SHOCKING news in the sports betting industry.

It has been said that any bettor must watch this,

Watch this now or stop betting on sports...