Need a refresher on classic Sonny Chiba films? Then Goohead has the solution 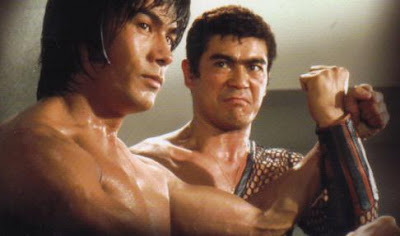 We have more than a few friends who own and operate video stores, so the deluge of online streaming of films by various companies, from NetFlix through Japan Flix, sometimes gets us a little down. Still, the march of progress can't be halted cold, and more and more films are finding their way online, and legally to boot. The latest case in point are a slew of classic Sonny Chiba films that are being made available via the Goohead Internet Channel.

According to Sci-fi Japan the channel is offering eight films starring Chiba, all of which can be streamed for free. These include 1974's "The Executioner" (above) directed by Teruo Ishii, 1977's "Karate Bullfighter", "Karate Bearfighter" and "Karate for Life" all directed by Kazuhiko Yamaguchi, "Golgo 13: Kowloon Assignment" directed by Yukio Noda (also from '77), 1975's "The Bullet Train" directed by Junya Sato, as well as 1978's "Shogun's Samurai" and 1980's "Virus" both directed by Kinji Fukasaku.

If you have to brush up on your Sonny Chiba films then we can't think of a better way to do it... especially in the case of "The Bullet Train", one of our favorite 70's action films here at the J-Film Pow-Wow. Head to Goohead to start that refresher...
Posted by Chris MaGee at 11:20 PM

"especially in the case of "The Bullet Train", one of our favorite 70's action films here at the J-Film Pow-Wow".

Maybe my sarcasm text meter is out of batteries and my memory is a bit hazy, but isn't this the Takakura led disaster wannabe bomb film where Chiba "conducts" the said bullet train. Maybe I need to rewatch but I don't recall any action in the film. I own a copy (UK), yet never felt the urge to watch it again.

If you need your ex-girlfriend or ex-boyfriend to come crawling back to you on their knees (no matter why you broke up) you need to watch this video
right away...

(VIDEO) Win your ex back with TEXT messages?