REVIEW: Kirei: The Terror of Beauty 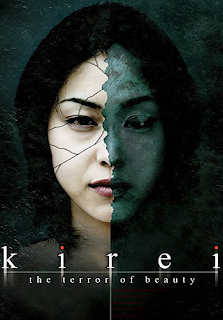 It might be hard to think of beauty as the subject of a horror film, but if it's viewed as society's expectations of what beauty should be (in particular female beauty), it starts to make a great deal more sense. If your looks don't conform to the images on TV, film and the day-to-day onslaught of advertisements, there can be a variety of pressures that weigh on your self-image and have led many people to take drastic measures to change their physical appearance. This can range from excessive exercise and "dieting" to areas of a more surgical nature: liposuction, skin tucks, breast augmentations, etc. Not that all cosmetic surgery should be considered unnecessary (reconstructions after accidents, skin grafts after burns and reduction of natural deformities that otherwise might be dangerous are all obviously helpful), but the thought that someone would voluntarily submit themselves to being cut open in order to change their appearance to better match what other people think they should look like is a terribly horrific thought.

Unless of course you're a beautiful young cosmetic surgeon such as Yoko - in which case the world seems to be at your feet. She has a booming practice with both young and old female clientele, the ability to charge exorbitant prices and a relationship with a handsome doctor (which seems to only involve sex). Yoko says that ugly people annoy her and that she feels that she is doing good for the world as a whole. Her smugness takes a hit when one day she meets Yoshie - a new customer with a face like a potato who desperately wants to be beautiful. She convinces Yoko to operate on her after hours without any nurses to witness (she does this by paying cash up front at higher than normal rates) and her requests soon expand to cover her entire body. When she doesn't receive the immediate satisfaction she craves, she demands even more surgery. It almost goes without saying that things devolve from there...Yoko eventually refuses to do any more procedures on Yoshie and tries to convince her to let the initial work heal first. Yoshie can't accept this and begins to sabotage Yoko's practice. 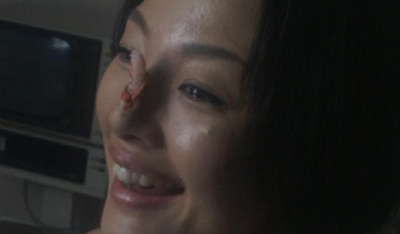 The film is far from being a high end production and feels like it was shot on video, but its muddy texture and blown-out whites actually provide a strange dreamlike quality that works in its favour. The lack of crispness actually enables the gore and makeup effects to be more effective than they really should be. They obviously aren't cutting edge, but end up being just disturbing enough. Possibly the greatest special effect the film has to offer is it's ability to make Asuka Kurosawa (who plays Yoshie) look homely and bordering on deformed. The bright sunlight outdoors and the shining surgical lamps seem to indicate heavenly possibilities for Yoshie, but the reality is a hellish nightmare. The initial results of her surgeries seem to make matters worse and her desperation grows and feels quite palpable - it's as if she is racing against time to reach aesthetic perfection.

Unfortunately, the film does flail a bit in getting across its point of the dangers of chasing that impossible goal. As Yoshie's vengeance plays out, she does indeed become more beautiful and uses that to her advantage - it's a bit odd to see her continuing with her strategy to get back at Yoko when she indeed has received what she wanted. Granted, it plays to the idea that someone can go just a little bit insane chasing their idea of beauty and can lose themselves in the process, but the story doesn't quite play out that way and falls back to far too much narration (which doesn't actually add a great deal). The acting, matching the look of the film, is somewhat flat and hinders any investment in the characters and their outcomes. However, for every misstep it takes, the film provides its share of disturbing moments - both visually and as food for thought.- and in the end provides an interesting view on the horror of how far someone might go to feel more accepted by society and meet its expectations.

Read more from Bob Turnbull at his blog.
Posted by Chris MaGee at 11:12 PM

New Diet Taps into Pioneering Plan to Help Dieters Get Rid Of 23 Pounds within Just 21 Days!