REVIEW: The Sea is Watching 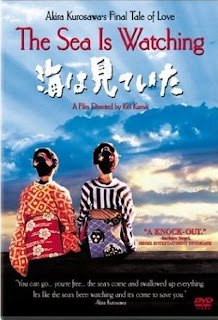 Based on a script that Akira Kurosawa wrote (adapting two novels by Shugoro Yamamoto) but never had a chance to direct before his death in 1998, "The Sea is Watching" was finally made by Kei Kumai and released in 2002. The story is situated in the red light district of a 19th-century coastal town – a time and place that recalls many of Kurosawa’s period films, especially those focused on lower-class characters. Two geisha remain at the center of the film: the young, innocent Oshin (Nagiko Tono) and the world-weary Kikuno (Misa Shimizu). One evening, Oshin helps hide Fusanosuke (Hidetaka Yoshioka), an inexperienced samurai fleeing the authorities after a violent incident. A tender relationship forms between them, which she comes to regard as a hopeful opportunity for a better life. Meanwhile, Kikuno is unable to separate herself from a good-for-nothing client who gambles away her money on a regular basis. She is offered a fresh start of her own by the kindly old Zenbei (Renji Ishibashi), but can’t bring herself to join him. As the film continues, the hazards and frailty of happiness become increasingly apparent to both women.

The flowing structure of the film invites the viewer to settle into the rhythms of everyday life within the brothel and the family-like dynamic shared between the geisha who live and work there. The passage of time is represented visually by the changing seasons, which influence and intrude upon the characters’ habits. A harsh winter in which the geisha huddle together for warmth soon gives way to spring-like weather, followed by the summer, which brings heat and torrential rains. Also lending depth and detail to the narrative is the town itself, which frequently acts as a boisterous outdoor fair where geisha, clients and passersby loudly converse and celebrate. And of course, there is the ever-present sea that is visible from the brothel and plays a significant role in the final portion of the film when it threatens to flood the community. 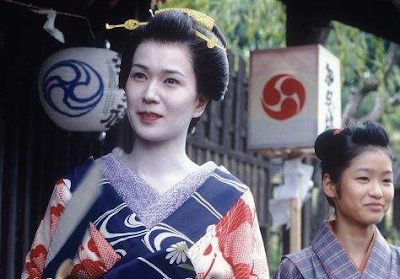 Even without this calamity, the geisha’s lives and hopes seem terribly fragile. Oshin’s narrative thread in fact involves two distinct sections in which she risks damaging herself through her habit of falling in love with men she meets, which the other geisha see as a serious disadvantage in their profession. Initially, the sweet-natured Fusanosuke seems like a solid marriage prospect for Oshin, and she prepares accordingly by feigning illness so she can stop taking clients and thus “purify” herself for him. Alas, in a cruel development, he turns out to be just another blind alley. A short time later, she regularly meets with a mysterious client: Ryosuke (Masatoshi Nagase), a wanderer who has seen his own share of hardships throughout his life. After sharing the heartbreaking story of his youth spent begging and being worked like a slave, Oshin fiercely urges him to try to make something of his life and promises to support him. The solemn Ryosuke seems like a decent enough man, but the previous episode with Fusanosuke serves as a beacon of warning. As all of this unfolds, Kikuno’s situation becomes more difficult as her lowlife regular exerts more control over her, making the possibility of escape offered by Zenbei seem increasingly distant.

Since Kurosawa was such a strong-willed filmmaker who preferred to personally oversee all the various aspects of his productions, it is absolutely reasonable to assume that, had he directed "The Sea is Watching," it would look much different from the version that exists today. But that said, Kumai certainly made a good effort in adapting the screenplay and completed a film that can be easily appreciated for its unique qualities. With assured direction, editing and cinematography, this tale of the lives of geisha is portrayed in an engaging and eloquent fashion that inspires compassion for its characters’ plights as they follow their twisting paths through the lower depths of society towards happiness.

Read more by Marc Saint-Cyr at his blog
Posted by Chris MaGee at 11:35 PM

If you are searching for the ultimate bitcoin exchange service, then you should use YoBit.

Get all the best alcoholic drinks at Duty Free Depot!

All the popular brand name drinks for unbeatable low prices.

Did you ever try to maximize your free BTC collections with a BTC FAUCET ROTATOR?