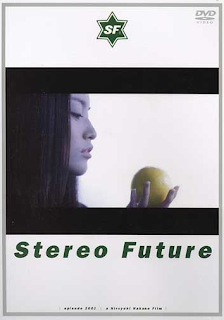 Like many directors who professionally came of age in the 1980s, Hiroyuki Nakano got his start in music video. That in itself is no indictment: David Fincher, Michel Gondry, and many other directors started with 3- or 4-minute promotional videos and have gone on to do substantial film work. However, in terms of his transition from music video to feature film, Nakano falls in closer to the Russell Mulcahy end of the scale, which is to say he has visual flair on a scene-by-scene basis but little idea of how to connect all the elements into a larger narrative.

And what a rich narrative "Stereo Future" offers. The story follows aspiring actor Keisuke (Masatoshi Nagase) who is just about too old to be an aspiring actor. He lucks into a speaking part in a b-grade jidai geki when the film's leading lady Mika (Kumiko Aso) takes a shine to him at his underwhelming audition. Meanwhile, his ex-girlfriend Eri (Akiko Monou)—still stinging from his wrongheaded accusation of her cheating—has taken a vow of silence. She does translation work for her telejournalist sister Kaoru (Tamaki Ogawa), who is making a TV series about the importance of nature and ecology. It's through this work the two sisters come to meet Danny (Daniel Ezralow), a charming western botanist speaking at a conference in Tokyo. Keisuke's experiences on the set of the film, Eri's encounters with Daniel, Mika's flirtations, and Kaoru's struggle to bring her eco-message to the masses intertwine for the film's two hours. And while there are scenes of genuine warmth, the whole isn't greater than the sum of the parts. This is the sort of multiple-protagonist story Yoshihiro Nakamura ("Fish Story"), Yosuke Fujita ("Fine, Totally Fine") or Kenji Uchida ("A Stranger of Mine") could make sing, but Nakano seems content to amuse here and there while piling gimmick atop gimmick. 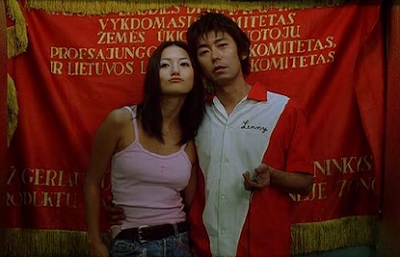 For example. Early on we observe the filming of the jidai geki, with particular attention drawn to the petty favoritism of the hack director. He lavishes his star (Naoto Takenaka on hammy autopilot) with praise despite his awfulness and barks insults at the supporting players, most notably Keisuke. (The double implication being that he must boost his star's ego by blaming all bad takes on other cast members and a jealousy stemming from Mika's amorous attention being directed at a lesser light.) The director chooses ridiculous slow motion and circular dolly shots to showcase action sequences, which only serve to illustrate how lame the action is. Yet Nakano uses the same overly showy stylistic tropes to depict a fight sequence outside of the film within a film to the same sad effect. The sequence goes on much longer than it should; a shot that doesn't work for 15 seconds becomes intolerable at 60, and seems to last forever when it should convey movement and violence. This might be termed 'Ryuhei Kitamura disease'—a fascination with a technically accomplished yet thematically pointless type of shot that drags the plot to a standstill so the audience can 'oooh' and 'ahhh' at how clever the director is. Rather than use a style to separate the film within from the greater story, Nakano just thinks it looks neat so he uses it wherever he can make it fit.

The elements that work well work so well that you want everything to gel. Some scenes are simple interludes in which we get a peek inside a character's life. Keisuke learning how to die onscreen from an experienced stuntman and Kaoru and her editor fussing over who handles the controls during post-production both effortlessly convey a realness and humanity with little fuss. Nakano's cast of characters is rich with unmet promise. Danny is in every way a stereotypical gaijin, gregarious and flirty and forward, he dresses with a casual exuberance, he has longish unkempt hair, even a long aquiline nose, yet he manages to be somehow charming in a dead-end role; Kaoru seems to be feeling her way toward a new kind of eco-tainment but her storyline is abandoned shortly after Ren Osugi makes a weird cameo in pancake makeup; Keisuke's criminal friends hint at a rowdy past but only seem to show up for faux-Yakuza comic relief. It's as if Nakano the short filmmaker had multiple films in mind, then decided to combine them into a single longer piece. Some bits fit together well, others less so.

"Stereo Future" is too glossy to be experimental, yet too scrappy for the mainstream. It's another post-Tarantino film that confuses the mashing together of disparate styles with synthesizing multiple techniques to create something new. POV, split-screen, flashbacks, idyllic pastoral interludes, music-video chop edits, video verity interviews… This one has them all, employed in the telling of a story that almost certainly would have been better served by a more restrained approach. Nakano hides some fine performances and a sweet, personal story under a great deal of unnecessary flair. "Stereo Future" hints at something more, but as a whole is frustratingly uneven.
Posted by Chris MaGee at 9:43 AM

Did you think about choosing the most recommended Bitcoin exchange service: YoBit.

Over at Take Free Bitcoin you can get free bitcoins. Up to 22 satoshis every 5 minutes.