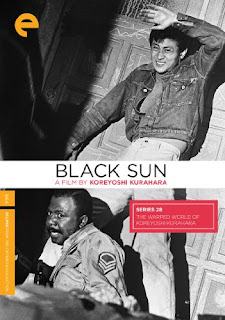 "Black Sun" is an odd beast...While it has all of Koreyoshi Kurahara's typical chaotic energy and style and it reaches for a grander message about the disenfranchised, it struggles to keep its characters interesting and stretches some scenes to their breaking point. It focuses on two outcasts from society - a homeless thief and a black American G.I. - who are at odds with each other for the majority of the film due to language barriers and various misunderstandings. Akira tries to shelter Gil in his ramshackle abode (a half bombed out church where he squats) while Gil nurses a bullet wound to his leg. As their predicament worsens, their relationship grows not only more volatile, but closer as well. You could easily be forgiven for sensing a bit of a "The Defiant Ones" feel in spots as they begin to understand each other and realize they need to stop their in-fighting, but will you care anywhere near as much about these two characters as the ones from that classic 1958 film? It's doubtful.

When we meet Akira at the beginning of the film, he appears in a desolate junkyard of a field that could easily be a freshly bombed out city bulldozed to the ground. He steals some of the few possessions that belong to the bums who scavenge there and sells them off to get money to buy a jazz album. He's a huge fan of the music (his dog is even named after Thelonious Monk) and considers any black man to be his friend. On the way out of the store, he almost gets run over by a rich man and woman who barely even notice his presence. The woman crushes his album and when the man half absent-mindedly waves some money to pay for it, Akira becomes enraged. He demands that they apologize to the respected black man on the album cover (drummer Max Roach - performer of the film's music) and will not stand to be ignored by them. He has a highly emotional disposition that can be quick to anger, but is also typically bright and happy-go-lucky - especially as he listens to his beloved jazz music in a freshly stolen car. After driving by the scene of a murder, he realizes when he gets home that the suspect has hitched a ride in the back of his jalopy. Though the wounded G.I. brandishes his machine gun at Akira, all he can think about is that a black man stands before him and therefore he must be a great man too. 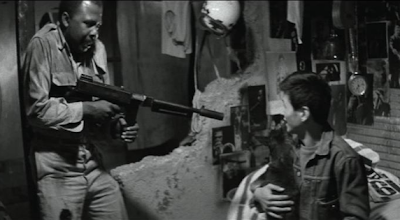 Gil has been accused of killing a fellow G.I., but the only additional piece of information we ever get about it is that the victim was white. No details as to whether there was prior intent or whether it was justified - just that Gil is desperate, in pain from the bullet in his leg and feels everyone is against him. Unfortunately - and this is a big problem - Gil is portrayed with zero subtlety and is all bluster, anguish and breathless statements. Since he speaks English, none of what he says is translated via subtitles and so it's very difficult to understand anything he says the entire film. As it turns out, most of what he says can be deciphered from context or it simply isn't relevant, but it's frankly still a very annoying aspect of the film and combined with Akira's constant highly melodramatic mood swings ("I love you!", "I hope the G.I.'s find you and kill you!"), it's a bit straining to spend any time with these characters at all. And there lies the problem - the film stays almost entirely with the two of them. There are excursions into the real world - Akira's favourite jazz bar, a few driving expeditions and a final, wonderfully filmed chase sequence - but there's a lot of time spent between just the two of them.

Granted there are valid points to be made here - both men have felt isolated from their environments and typically are judged quickly by others due to their outward appearances (even Akira assumes Gil can play and sing jazz music simply because he is black). Kurahara uses some flashbacks in Gil's head to bring these points to the fore while allowing the visuals to do the rest (the film is beautifully lensed). He brings such a dynamic feel to their world using handheld cameras, attaching them to moving vehicles and using a few timely freeze frames that there really does seem to be a high level of chaos in their lives. Particularly when the score crashes in with Roach's thundering drums and vocal/horn sounds that feel as cathartic for the musicians as they are for the listeners. A blues tune called "Six-bit Blues" plays several times and contains lyrics that Gil can certainly understand as he contemplates any form of escape: "Gimme six bits worth o'tickets, on a train that runs somewhere". Kurahara also uses the same names (and same actors) for his characters as the ones in "The Warped Ones", his 1960 film about rebellious youth with nothing to fear. Since Akira and Gil knew each other in the previous film, this obviously isn't a direct sequel, but it sure has that feeling sometimes due to the style and where Akira's life is currently headed (a direct line from the previous film). Even his prostitute friend Yuki feels like a perfect map to her character in "The Warped Ones" (again, played by the same actress). The jazz bar is the same set as their hangout from 4 years previous too, but it also is not the "same". Many of these touches add a great deal to the "world askew" feeling of the film, but even Kurahara's stylistic choices can't quite pull enough of an entertaining yarn out of this message movie. He certainly grabs your attention at times though.

Read more from Bob Turnbull at his blog.
Posted by Chris MaGee at 8:02 PM