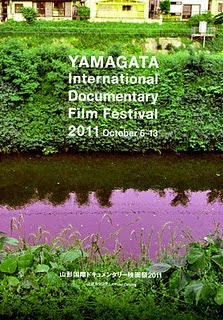 It’s the middle of the night. A harsh spotlight reveals a couple of mongrel dogs settling down for a uneasy night in and among detritus filled plastic crates and miscellaneous junk strew across the deck of a small boat. Rats also prowl amongst the old machine parts and marine cast-offs. The restless midnight camera soon reveals the subject of the film, Yasuo Takashima, also referred to as Ojichan (a diminutive form for “uncle”), prowling the quayside. An irascible and eccentric old alcoholic - nearly homeless – he lives on a boat. He’s an archetypical example of human jetsam, cast off, ignored and left unspoken about by Japanese society.

Much to the chagrin of the neighborhood, he’s moored his boat, along with several other stray boats he’s collected, illegally on one of the old canals that still run through the southern and eastern kus of Tokyo. With the massive amounts of junk he collects and the handful of stray dogs he keeps for company, he’s become a bit of a neighborhood nightmare with his ever-growing floating trash heap.

Director Yoichiro Okutani keeps in close proximity, following him on foraging runs. In one notable scene, Ojichan proudly shows off a plastic garbage bag full of fish – no doubt found in dumpster. He proceeds to gut the contents in the dark of night at a public water spigot in a small park. He deftly eviscerates them to make himono, air-drying his catch by the canal’s side. The viewer can almost imagine the stench.

When he does purchase something, it’s a gigantic bag of dog food.

He has a few interactions with other lonely old guys hanging out at the local pocket park. He also mugs to the camera with his frequent asides and commentaries about life on the canal. But by far his most loving, touching and sometimes disgusting moments of genuine contact with the living beings is with his dogs. In their presences he dotes on and babies them, cooing with childish delight at their every action. In one scene, the big old hound, Jackie, gets sick, defecating runny stool on newspapers strewn across the deck of the boat. Ojichan gleefully scoops up the soiled newspapers, nonchalantly throwing them overboard, all the while shooting out a stream of loving patter about how much poor Jackie stinks. 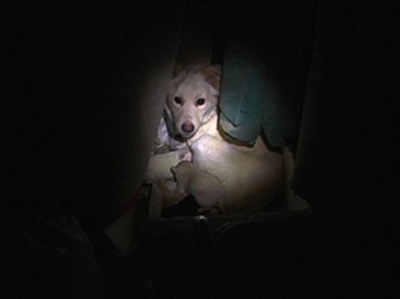 A bit of background seeps into the film as Ojichan takes the filmmaker on a canal cruise, pointing out the site of a small shipyard where he once worked, now a particularly faceless office/residential building. He tells stories of his old days on the water. We see police trying to evict him for his canal spot. We see him working on a boat engine. He appears a savvy smart repairman past his prime, getting a few odd jobs. The boat he fixes barely functions as he goes on a test run.

By the end of the film, Ojichan, coughing and sick is evicted from his moorages. The camera trucks through some reeds onto a muddy spit where a single boat stands on blocks. Guarding the cabin door is the faithful Jackie. Inside lies poor Ojichan, surround by a couple of other dogs. He complains that he’s’ too sick and tired to even get up. The camera pans in the cramped quarters to a cardboard box. Inside the box is another dog, Soleil, and her newly birthed litter, squirming to find the teats of their skin and bones mother. Ever the mother himself, we hear Ojichan’s voiceover expressing concern for the health of Soliel.

“Children of Soleil” falls into a contemporary humanist strain of documentary practices, most influenced by the groundbreaking work of Sato Makoto, Makoto’s best remembered for 1992 masterpiece “Living on the River Agano,” in which he and his crew lived with a community for several years, documenting their daily lives. Makoto opened up a new form of documentary – for Japanese filmmakers – that while not being explicitly politically committed, allowed for deep commentary on Japanese society through a sort of embeddedness. Looking at the Japanese documentaries highlighted at the Yamagata International Documentary film festival over the past years, one gets the impression that the Makoto style is the reigning way of making docs in Japan. What makes the good ones shine is the development of the narratives, identification with the subjects and their issues and most importantly, the questions raised by the documentary practices themselves. “Children of Soleil” covers all these areas – in spades.

Takashima-san, Okutani’s subject, supplies all the audience identification one needs. Sure, he’s a bit crazy and not particularly environmentally correct, but his lifestyle and independence offers a particular nostalgia and longing that may be belied by his poverty-stricken existence. His story develops with a passionate and non-judgmental eye.
Bigger questions come up - particularly, with the final scenes of old Ojichan suffering, perhaps near death. Where is the point where a documentary maker/journalist should intervene? Where’s the line where a documentary keeps its humanist eye or becomes exploitive of an otherwise trusting subject? What about Ojichan’s complicity in getting his life documented? What are the real motives of the maker and subject? Shouldn’t they be explored during the making of the film?

After a few days in Yamagata watching hours of human misery, as an audience member I began to think of the 3rd point of view – the viewers. From my (relatively) comfortable theater seat, I wondered if there’s a sort of perverse tourism on display. The somewhat exotic and old-fashioned lifestyle of living on the canals is certainly tempered by the genuine tragedy that Ojichan suffers. The viewer easily walks away to his/her middle-class life, perhaps touched by the story, but ultimately left with the feeling of smugness and superiority. A sort of “I’m-glad-I’m-not-in-that-position/situation” may lurk under the veneer of pathos.

I’ll be exploring these questions with Yoichiro Okutani next week and will give a full report on J-Film Pow-Wow over the coming weeks.

Read more by Nicholas Vroman at his blog
Posted by Chris MaGee at 8:08 PM