Ken Shimura: The Lord of Stupid 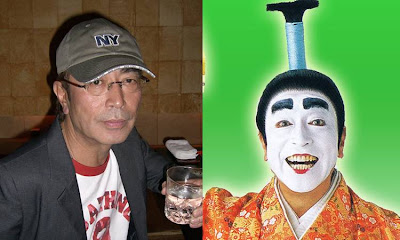 I remember when I was in Japan a few years ago I was up late one night and I caught a very strange show on TV. There was a guy dressed up in this exaggerated kimono and top-knot with a couple of women and they were all trying to get a reaction out of a guy who was dressed up like a scarecrow. It was a dead simple scenario, but this guy with the top-knot and his two lady friends really went overboard trying to get this guy to react. They were hitting him and putting clothes pins on him and generally being sadistic bastards… and it was hilarious! Sadly my stay in Japan ended and I came back to Toronto not knowing what the show or who the guy with the top-knot was. Well, that is until a while back I was told he was Ken Shimura, the most famous comedian in Japan and next to Takeshi Kitano and TV host Monta Mino the one person you’re most likely to see on Japanese TV at any given moment.

The 59-year-old Shimura started out in the 70s as a member of the hugely influential comedy group, The Drifters. Their show “Hachiji Da Yo! Zen'in Shugo” was rude and crude. Kids loved it and parents hated it, but when it went off the air in 1985 Shimura went solo and started his own comedy variety show on Fuji TV called “Ken Shimura no Bakatono-sama” or “Ken Shimura: The Lord of Stupid”. It turns out that’s the show I laughed myself silly watching.

Like the scarecrow skit that I mentioned “Ken Shimura no Bakatono-sama” features simple slapstick comedy scenarios that even if you don’t speak Japanese you can appreciate, and having been running for nearly a quarter of a century there have been some pretty big guests on the show: Takeshi Kitano, the comedy duo of Hitoshi Matsumoto (Dainipponjin) and Masatoshi Hamada, a.k.a. Downtown, Chieko Baisho (Tora-san, The Hidden Blade), and Miho Kanno (Dolls, Sakuran).

Check out the clips below, the first with Shimura as his Bakatono (Lord Stupid) character and actress Eiko Koike (2LDK, Seppun) spoofing Takashi Shimizu’s J-Horror film “Ju-On”, and the second featuring a variation on Shimura’s Henna Ojisan (Strange Uncle) character pestering some woman at a sidewalk café. Sophisticated? No. Very funny? Definitely.