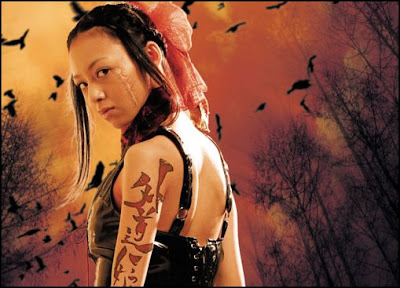 Okay, there's been no word yet of a "Tokyo Gore Police" sequel in the works, but Yoshihiro Nishimura and "Tokyo Gore" screenwriter have got the next best thing. Nishimura is producing and providing special make-up effects for Kengo Kaji's upcoming action/ splatterfest "Samurai Princess". Kaji wrote trhe screenplay for "Tokyo Gore Police" as well as Higuchinsky's 2000 cult horror flick "Uzumaki". This time out he's handed off screenwriting duties to Sôtarô Hayashi who's worked from a story idea from Kaji.

What, pray tell is that story idea? Well, according to Quiet Earth "Samurai Princess" is set in a highly fictionalized past in which samurai live side-by-side with human-looking "mechanical dolls". Everything goes to hell when a group of these dolls goes berserk and start wreaking havoc and unthinkable carnage. A mad scientist named Kyoraku creates a special female ninja doll (played by AV actress Aino Kishi) equipped with 11 different weapons in her body to go up against her rouge counterparts and end the senseless bloodshed.

The official site for "Samurai Princess" has just gone live here, but at the moment it only features an extra large image of the film's poster. British site SexGoreMutants does have some small stills though, and actress Yukari Tateishi who's working on the film has posted some photos with costume details on her blog. Samurai school girls! Kawaii ne!

No word yet on when "Samurai Princess" will be completed or see a theatrical release, but with Nishimura and Kaji involved you can bet we'll see it show up at various midnight screenings and festivals in the very near future.
Posted by Chris MaGee at 4:36 AM