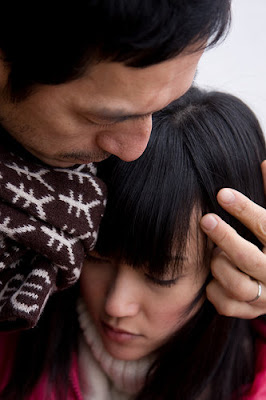 Edmund Yeo is a young filmmaker who was born in Malaysia and currently lives in Tokyo . He has found success as a producer, writer and director for various film projects since 2006, most notable among them being his 2008 short "Chicken Rice Mystery", which was recognized with an Honorable Mention and a Best Acting award (for star Kimmy Kiew) at that year’s BMW Shorties festival. His latest effort is "Kingyo", a 25 minute film based on the renowned Yasunari Kawabata’s 1924 short story "Canaries". It opens on an evening in the Akihabara area of Tokyo where a young woman (Rukino Fujisaki) dressed in a French maid’s outfit advertises guided tours for ¥10,000 to passersby. After a few unsuccessful minutes, she faces an older man (Takao Kawaguchi); he is a professor who once shared a relationship with her that ended some time ago. Paying her, he asks for a tour, and they begin to slowly walk together through the city.

So begins a calm, atmospheric rumination on lost love that, as most great short films do, acts as more of a visual poem than a story. The two characters don’t converse so much as he makes a sort of confession to her, gradually revealing the true nature of their previous relationship and how it was complicated by a third figure: the man’s wife. This love triangle is represented by a pair of goldfish that get passed between the three characters, ultimately serving as significant symbols of affection and infidelity alike.

Easily the most remarkable feature of the film is its use of split-screen. I have long been of the opinion that such methods as multi-frame composition signify the next logical step in furthering the creative potential of the cinematic medium, with Canadian director Bruce McDonald’s "The Tracey Fragments" serving as a winning example of such experimentation in narrative film form. While that film often uses several images on the screen (arranged and edited in often complex patterns), Yeo keeps it to a maximum of only two at once for "Kingyo", but even then, the benefits of this stylistic choice are clearly seen. Its effectiveness simply comes from the way various shots play off of each other when juxtaposed on the same screen, communicating both their own meanings and different ones altogether when considered in relation to one another. Because of this element, composition and editing take on a new importance and yield more creative rewards for both the filmmaker and the viewer, and surely enough, Yeo’s careful control over the split-screen technique in his film creates a fascinating dynamic that, with the right cuts and selection of images, speaks volumes through purely visual means.

What especially makes "Kingyo" a success is how its experimentation never reduces it to a chilly or pretentious aesthetic exercise, but instead remains constantly in service to its characters and their emotional states. Often, the professor and the young woman will inhabit the same space, yet they are nonetheless isolated through the split screen. There is also the scene on a bridge overlooking Akihabara, with special attention given to the two characters’ hands resting close to each other on a railing. Through such moments in the film, Yeo clearly focuses on the distance that can grow between two people, be it in the case of the man and his wife or him and his mistress.

On top of being emotionally poignant and artistically daring, "Kingyo" is absolutely gorgeous to look at, providing a generous feast for the eyes. The obvious standout is the nocturnal realm of Akihabara, a bright, colorful wonderland that brings to vivid life the mythical, romantic Tokyo of people’s imaginations. In stark contrast are the daytime sequences captured in Inokashira Park and the wife’s home, colored with pale blues and stark whites. And throughout the entire film, the two goldfish are prominently featured, their brilliant orange bodies seeming to embody the strong passions and conflicting feelings felt by the reserved characters.

Made in the vein of Hirokazu Kore-eda and Wong Kar-Wai (Yeo has said that he would often put on "In the Mood for Love" for inspiration while editing), "Kingyo" is a rich and stunning film that chooses to approach emotionally complex themes from a strictly cinematic standpoint and emerges triumphant. It is yet another great achievement for Edmund Yeo and a strong indicator of his considerable talents. Audiences, take note: this budding filmmaker is one to keep an eye on over the next few years, and I personally can’t wait to see more of his work.

Read more by Marc Saint-Cyr at his blog.
Posted by Chris MaGee at 3:59 PM