Yoji Yamada to be honoured with the Berlinale Camera Award 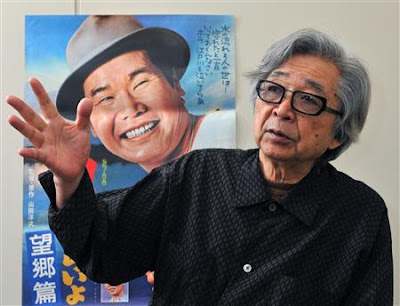 It was only couple weeks back that we reported that Yoji Yamada latest film "Otouto (About Her Brother)" would be entered into competition at the 60th annual Berlin International Film Festival, but now we have word that regardless of whether or not his reworking of Kon Ichikawa's 1960 film ends up winning the much-coveted Golden Bear Yamada is guaranteed that he'll be going home with a statuette.

The Mainichi Daily News is reporting that the 78-year-old director of the "Tora-san" series and other classic films such as "The Yellow Handkerchief" and "The Twilight Samurai" will be honoured with the Berlinale Camera Award in a ceremony at the festival on February 20th. The Berlinale Camera Award is given to "film personalities or institutions to which [the Berlinale] feels particularly indebted and it wishes to express its thanks." With 75 directorial credits and over 100 screenwriting credits to his name it's easy to see why the folks at the festival feel indebted to Yamada. Yamada himself likens this honour to that bestowed upon Kon Ichikawa, "I got a hint for my film from director Ichikawa's film 'Otouto'. I'm honored to receive the same prize as him," he told Mainichi.