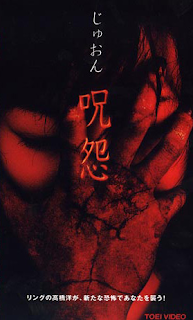 "Ju-on". So this is where it all began. Sort of. In 1998, recommended by Kiyoshi Kurosawa to write and direct one or more of the segments for the Kansai TV horror film anthology "Gakko no Kaidan G", Takashi Shimizu introduced Japanese audiences to Toshio and Kayako Saeki (the two shorts, "Katasumi" and "4444444444", are available on the DVD for directors cut of "The Grudge"). This would plant the seeds that would gestate and give birth two years later to the V-cinema smash hit, "Ju-on".

If you’ve seen any of the several incarnations of "Ju-on", you’ll know the story. Takeo Saeki, an illustrator working and living in Nerima, discovers his wife Kayako’s obsession with their son Toshio’s teacher Kobayashi and in a fit of rage kills his wife and son. Of course Kayako returns as a vengeful spirit, an Onryo, which thanks to Kabuki typically consists of three elements: a white burial kimono, long black hair, and white face make-up known as aiguma. Thus we are presented with the prototypical vengeful female spirit which permeates what was typically the realm of theatre and period horror films like "Kaidan", but which now has made its way into modern Japanese horror films. 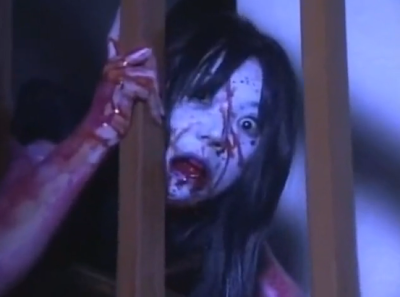 Of course, it’s not this fusion of Kabuki influence that makes this film so eerie and creepy. Takashi Shimizu, the mad genius that he is, took the framework of an anthology film, the very production model that gave him his start as a horror film director, and applied it to a feature film. Utilized in all the Japanese productions of the "Ju-on" series (the two US versions use a standard narrative structure which saps the films of much of the permeating dread the Japanese films have), the film is broken up into chapters, each presenting a different character and their relationship to Takeo Saeki’s home, in which the vengeful spirits reside. This broken narrative, which plays with the audience’s perception of time and events, doesn’t go to the same disorienting and brilliantly intertwining levels that later productions go to ("Ju-on: The Grudge 2" being the mad apex), this being his first experiment with the format, but it still leaves the audience piecing together exactly how everything unfolded. But it’s not just the disorienting narrative that throws you off, it’s the tension Shimizu creates with each small tale that at the same time steadily builds over the narrative as a whole that slaps you in the face.

Now this is a v-cinema effort, so the effects aren’t up to the same standards that the later films produce and the production value is obviously not at the same level, but Shimizu manages to work wonders with the little resources he had. Basically, he creates a fantastic little film out of almost nothing. And he does it through fractured narrative, and a penetrating dread the fills almost every frame. In short he does it through the power of cinematic technique.

A side note: This film is not readily available outside of Japan with English subtitles. Back in the day, desperate to see the film, I watched it without subtitles. I knew enough about the plot, having seen "Ju-on: The Grudge", that I knew it wouldn’t be a waste of time. I watched it late at night, alone in the dark, and from the first frame I was completely absorbed. The visual despair that Shimizu created was so strong, that watching this film for the first time, without subtitles, left me slightly scared by the end of the film. If a film can cause a reaction without needing to rely on exposition or narrative, then you know that visually it’s doing something right. And Shimizu has the power to do that. There aren’t many directors that are able to create such a feeling through the use of lighting, composition and montage, I’d say Kiyoshi Kurosawa and Hideo Nakata are the only others who can do this effectively, but Shimizu is in the league of these greats.

"Ju-on" is not the perfect horror film. It’s a little rough around the edges, but it’s the start of a style that Shimizu would perfect, and that’s something beautiful.

Read more by Matthew Hardstaff at his blog.
Posted by Chris MaGee at 12:15 PM