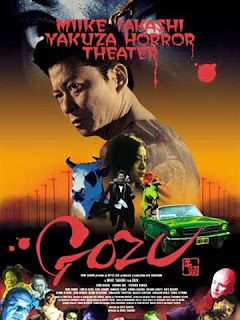 Takashi Miike’s “Gozu” is so seeped in strangeness that it defies explanation. The only thing certain is that it manages to out-weird David Lynch in the weird department.

What begins as a B-level yakuza story quickly descends into the realm of the bizarre. Minami (Hidek Sone) is a low-level yakuza given the task of killing Ozaki (Sho Aikawa), a loose cannon prone to violent but hilarious outbursts. When the film begins, we see Ozaki interrupting a meeting in a restaurant by telling the boss ( Renji Ishibashi) that the barking Chihuahua outside is in fact a trained assassin out to get yakuzas. Needless to say, everyone in the clan thinks it’s about time Ozaki is put down for good. So the plan is for Minami, one of Ozaki’s loyal followers to accompany him out to Nagoya on a bogus assignment and take him out and then dispose of the body. Things unfold accordingly until Minami decides to calm his nerves by stopping at a local coffee shop while leaving Ozaki’s dead body in the car. In the coffee shop, Minami is greeted by a host of the odd characters that include a trio of transvestites and a sake seller that delivers his lines verbatim off of cue cards. From then on, things manage to get even weirder, starting with Ozaki’s body mysteriously disappearing from the car.

There’s no shortage of weirdoes in this small town. First off, there’s the man with the Yin Yang face. He claims that he suffers from some sort of pigment deficiency syndrome but it’s obvious that half of his face is covered in white paint that is starting to peel. This odd little fellow serves as Minami’s guide around town and finds him an inn to stay for the night, more craziness ensues! The keepers of this inn are deranged siblings that just add to the mounting confusion. He’s a man-child that may or may not be able to commune with spirits while she’s an emotionally vacant woman in her 50s who is obsessed with her lactating breasts. They run the inn together during the day and a secret venture at night. The siblings bottle the sacred breast milk and sell it to the locals. 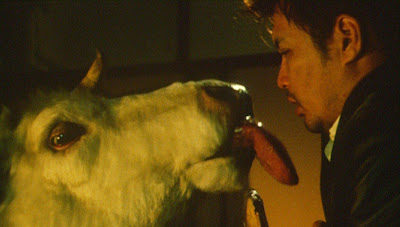 With “Gozu”, Miike once again proves that he can take any generic story and infuse it with his vivid imagination to create something fresh and compelling. The film begins as a standard yakuza story then switches to a gothic nightmare, before finally morphing into a supernatural tale. The tonal shifts can make for a confusing viewing experience but that’s part of the fun. As soon as you become invested in the storyline, the film switches gears and ups the ante by introducing something unexpected. This is one of those rare cases where the budgetary constraint actually added to the film. There’s a seediness to the look of the film that makes it even more unnerving to watch. Another plus is the great makeup work on the film, it’s cheap and over the top; as a result, it gives a surreal sheen to everything. Lastly, the cast is probably the biggest asset of the film. All the actors fully commit to their roles no matter how outlandish. But the one actor that truly stands out is Hidek Sone. He manages to hold his own against all the madness. When surrounded by such insanity, it would have been easily for Sone to overact but he never does. His understated performance is the emotional anchor that keeps the film from going off the rails.

As strange as the film is, it does manage to calm down for a second to delve into Minami and Ozaki’s relationship. Throughout the film, Miike drops in brief flashbacks to show the strong bond that exist between the two characters. We see them laugh and bicker like a couple who’s grown used to one another’s company. Traditionally in yakuza films, the theme of homosexuality is thinly disguised as camaraderie but what Miike does is bring it to the forefront in the final act of the film by introducing a mysterious female character. She inexplicably knows all of Minami’s secrets, ones he has only shared with Ozaki. By the time the film reaches its infamous end scene, it becomes apparent that this mysterious woman is a vessel for the buried desire that both men have for one another.

“Gozu” is quite an achievement. It manages to be an utterly baffling but fascinating watch. You’ll either laugh at the absurdity of it all or be truly disturbed by it, or both.

And that, I guess, is the point.

Read more by David Lam at his blog
Posted by Chris MaGee at 7:27 PM