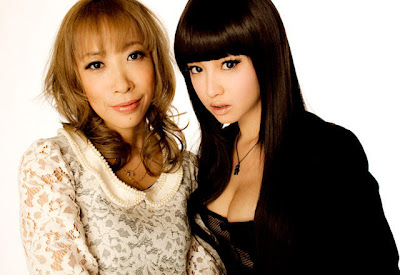 Our second piece of news coming via Twitch today reveals what one filmmaker who has seemingly been M.I.A. in the past couple years is up to next. Many of you will remember 2007's "Sakuran" starring Anna Tsuchiya as a young woman rising through the ranks of geisha house. That film, based on a manga by Moyoco Anno, marked the directorial debut of fashion photographer Mika Ninagawa. With her photographic background (and a bit of good genes from her dad, prominent stage director Yuki Ninagawa) "Sakuran" ended up a gorgeous but a little slim account of fame and beauty in Japan's Edo Era. Since "Sakuran", though, Ninagawa went back to fashion photography, and many wondered if she'd make the leap to filmmaking again.

Now word has come that Ninagawa (above left) has cast actress/ model/ singer Erika Sawajiri (above right) in her sophomore film "Helter Skelter". Once again the film is based on a manga, bu artist Kyoko Okazaki, and again it deals with themes of fame and beauty. This time out though the drama takes place in a world Ninagawa knows very well -- that of high fashion. Sawajiri stars as Ririko, a hugely successful model who is hiding a terrible secret -- her astonishing beauty is not natural but is instead the result of extensive plastic surgery.