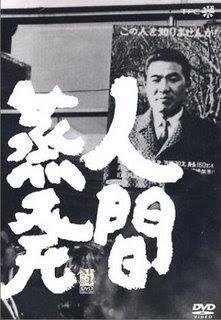 Reviewed by Chris MaGee
It would seem that from the very beginning Japanese cinema has been concerned with the nature of truth, at least from the point of view of us here in the West. In 1950, it is famously said, that the world was introduced to Japanese cinema by Akira Kurosawa’s “Rashomon”, the story of the murder of a nobleman and the rape of his wife by a bandit that questions the reliability of what we call the truth by using flashbacks to the crime and multiple viewpoints of witnesses to show just how subjective our reality can be. The film has even spawned the popular buzz term “The Rashomon Effect” to illustrate this subjectivity. No doubt that it set the bar, but I believe the bar was reset in 1967 by another giant of Japanese cinema, Shohei Imamura. In that year he released a documentary about the disappearance of a man and his wife’s search for his whereabouts simply titled “A Man Vanishes”.
In the same way that “hikikomori”, individuals who withdraw from society has come to prominence in the past decade, cases of people who just drop out of society and disappear have fascinated the Japanese throughout the 20th century. The theme was explored by novelist Kobo Abe in his 1962 novel “Woman in the Dunes” which was adapted to the screen by Hiroshi Teshigahara. A fictional missing person case that shares startling similarities to “A Man Vanishes” was also at the heart of Yoshitaro Nomura’s 1961 mystery “Zero Focus”, but instead of taking his cue from fiction Imamura starts out with facts.
One day in 1965 Mr. Tadashi Oshima, a plastics salesman vanishes without a trace. With the backing of Imamura Oshima’s abandoned fiancé Yoshie Hayakawa tries to piece together what might have lead to this mysterious disappearance. Actor Shigeru Tsuyuguchi (star of Imamura’s 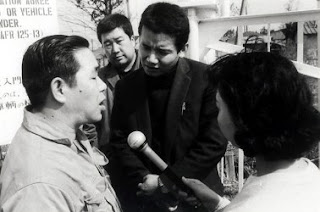 “Insect Woman” and “Intentions of Murder”) and Yoshie interview Oshima’s family and co-workers to form the picture of a man who was hiding some dark secrets. Prone to drink Oshima had been caught by his employers embezzling 400,000 yen from the company. It also comes to light that Oshima had gotten another woman pregnant. Could either of these things been the seed of his disappearance? Another possibility is put forward by a spirit medium who says that Oshima is dead and that Yoshie’s own sister Sayoko, a failed geisha may be behind his death.
The investigation is captured in stark black and white by Imamura, each new revelation is observed calmly and objectively, but despite the continued accumulation of information there’s no break in the case. One starts to wonder what the end result of this documentary will be, but an hour and a quarter into the film everything shifts. Imamura and Tsuyuguchi discuss how Yoshie doesn’t seem to possess the same drive to find her missing fiancé, that she’s just playing the role of a grieving widow. Could it be because she has fallen in love with Tsuyuguchi? And what about the damning evidence that keeps piling up against Sayoko? The past gives way to the present as the focus of “A Man Vanishes” switches from what may have happened to Oshima to what is happening between Tsuyaguchi and Yoshie, and Yoshie and Sayoko. 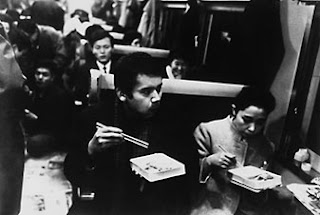 Yoshie confronts her sister in a teahouse and grills her about eyewitness accounts of Sayoko being seen with Oshima right before his disappearance. The tension mounts as Sayoko breaks down in tears denying she ever met with her future brother-in-law and refutes the evidence presented shopkeeper who swears he saw them together. Then, suddenly, Imamura pulls the rug out from under us. He shouts to have the set pulled down and in a moment the teahouse are lifted away to reveal a studio sound stage. The case of Tadashi Oshima is in fact true, but this drama between jealous sisters is a fiction created by the director… or is it? Yoshie isn’t an actress, nor is Sayoko, but the involvement of Imamura and his crew could be mirrored by the theory in quantum physics that the simple act of observing particles automatically changes them. In the end Imamura calls the whole film a fiction and we are left, as the characters at the end of “Rashomon” asking what exactly is the truth? A fascinating film.
Posted by Chris MaGee at 10:31 AM