UPDATE: Petition to bring No Borders, No Limits to Toronto 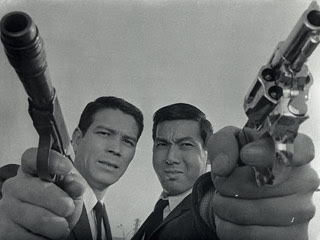 Here's an update to my rant about Mark Schilling and Marc Walkow's "No Borders, No Limits: Nikkatsu Action Cinema" series to Toronto. I spoke with Marc and it turns out that they have tried from the very beginning of the tour to bring it to Toronto, specifically to Cinematheque Ontario. The strange this is though is that Cinematheque has declined on two seperate occasions due to “technical requirements for the digital subtitle projection” (?!)
Well, here's a chance for you to help in bringing this fantastic series of films to Toronto. The Pow-Wow is starting up a petition to bring the "No Borders, No Limits" series to Toronto and all you have to do is head on over to the Facebook group we've set up, join and leave you name on the wall.
Here's the link:http://www.facebook.com/group.php?gid=11820176142
Let's see what a little grass roots movement can do, folks! Thanks in advance for your support!
Posted by Chris MaGee at 9:52 AM