Reviewed by Chris MaGee
Battle and bloodshed. That’s what greets us at the beginning of the 2007 blockbuster “Dororo”. We’re in the middle of the Sengoku period when powerful warlords ruthlessly divided up the Japanese landscape, each trying to secure the biggest piece for themselves. One of those warlords, Daigo Kagemitsu, takes shelter from battle at a temple where a mad priest carved statues of 48 demons. What better place to contemplate the insanity of the world, he thinks, so despite the warnings of the temple priest he spends the night surrounded by these snarling and grimacing statues and it’s here that he makes an unholy bargain with the demons that inhabit them. If they can grant him dominion over the world he will pay the the demons whatever price they ask, but he doesn’t know how high a price that will be.
Jump ahead 20 years: a scruffy young woman, a thief, who’s dressed like a boy stakes out the crowds in a ramshackle town looking for an easy mark. Meanwhile a mysterious dark cloaked figure slips through the throngs of people and into a seedy drinking hall. On the street the thief picks a man’s pocket and he and his friends give chase, but the thief eludes them by hiding in the drinking hall and it’s here that her life is changed forever. The cloaked figure attacks one of the dancers on stage revealing her to be a spidery demon, but what’s even stranger is that this man can slip off his forearms, unsheathing deadly blades underneath. Plus he can’t be wounded. Who is this man?!
Well, any fan of manga or Japanese pop culture will recognize Hyakkimaru from Osamu Tezuka’s 60’s manga “Dororo”, the grown son of Daigo Kagemitsu, the child whose body was promised to the 48 demons. At birth Hyakkimaru was divided up into 48 parts and now it’s his mission, with the help of magical artificial limbs, to track down and kill each demon thereby reassembling his true body piece by piece. The thief, Dororo, will become his companion in his quest, if only to be there when he Hyakkimaru regains his left arm so she can retrieve the blade that it will replace. 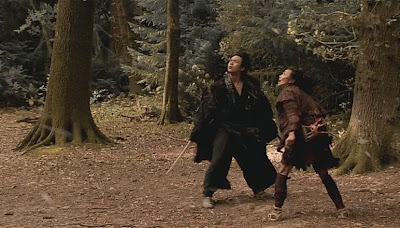 Far fetched, but it doesn’t sound half bad, does it? And despite some very uneven special effects that combine state of the art CGI with cheesy Power Rangers style men in suits and some uneven performances by Kou Shibasaki as Dororo and Satoshi Tsumabuki as Hyakkimaru the film tries it’s best to deliver swashbuckling samurai action.
Director Akihiko Shiota and screenwriter Masa Nakamura do take some real liberties, not only with the source material by making Dororo a young woman instead of a little boy, but also by making silly historically anachronistic decisions like putting belly dancers in 15th century Japan and using what sounds like music by the Gypsy Kings during a montage sequence showing Hyakkimaru and Dororo battling demon after demon.
It would be easy to use these negatives to poke the film full of holes, but one thing I couldn’t deny while watching “Dororo” was this: if I had scene this film between the ages of 9 and 13 I would have thought it was the best film ever, and maybe that’s how a film like “Dororo” should be judged. While it’s hard for me to wholeheartedly recommend it, and even though it’s a bit too intense for young children, “Dororo” is a fun for the whole family film… especially if Mom and Dad can shut their brains off for a couple hours. Here’s to seeing if the next two sequels, slated for release later this year and in 2009, will expand or possibly improve on this film.
Posted by Chris MaGee at 8:22 AM