“Death of Domomata” news and trailer 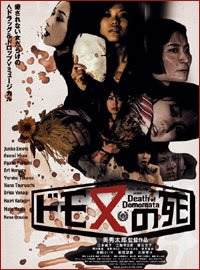 The folks at Nippon Cinema have got news and a full trailer for what sounds like a really fascinating film. Titled “Death of Domomata” follows a group of female drug addicts locked up in a rehab facility as they put on an amateur production of Takeo Arishima’s 1922 play “Domomato no Shi”. The director, Shuntaro Oku, has a background in theatre and the cast of young actresses is headed up by Asumi Miwa (Love & Pop, Ju-on, Ping Pong) and Junko Emoto (Kamikaze Girls, Otaku in Love, Memories of Matsuko). Pretty impressive.

What’s really interesting is that Arishima’s play was in fact based on the Mark Twain short story “Is He Living or Is He Dead?” and tells the story a one of a group of artists who thinks that the best way to increase the value of his paintings is to fake his own death.

How these fascinating films slip under the radar I don’t know, but here’s hoping that this one gets a North American DVD release after it opens in Japanese theatres in June.

Check out the Nippon Cinema report and trailer here: http://www.nipponcinema.com/news/trailer_for_oku_shuntaros_death_of_domomata/

And check out the official site for the film here: http://www.domomata.com/
Posted by Chris MaGee at 6:23 AM