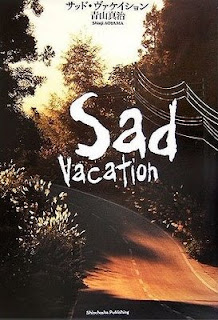 Shinji Aoyama's "Sad Vacation" seems to, if not contradict itself, try to make two opposite points of view about families:
1) Your family is wherever you choose to make it.
2) There are family connections you just can't avoid.
But by the end of the film, the two don't seem to be contradictory so much as complimentary.
However, to begin at the beginning, we first meet Kenji (played by the terrific Tadanobu Asano) as he comes across a young Chinese orphan boy during an illegal smuggling run. He knows the boy will fetch a high price, but won't have a life or family of any worth. So he takes the child home with him and leaves the business. He already takes care of the sister of an old criminal friend of his, so the three of them begin to form a household that Kenji supports via odd jobs. And then during his routes as a personal driver, Kenji meets two people that will change his life - a new girlfriend that he can't quite figure out how to integrate into his current situation AND his long lost mother.
His mother's new husband owns a delivery service that utilizes a number of different drivers. These drivers have formed an extended family around the owners and have all drifted there avoiding other circumstances. After confronting his mother and learning he has a new half brother, Kenji also seems to be drifting into the business. But is that to reconnect with his old/new family or to punish them? He certainly seems resistant to his actual blood relatives, but very sympathetic to all the other miscreants and drifters. His mother seems to be content to just let things happen.
Though the story is somewhat convoluted with perhaps a few too many characters to keep straight, it still manages to make the main people very engaging. And as the story starts bringing more of them together, you can't help but want a nice pat happy ending for everyone (even though it would not have worked with the tone and feel of the film). But it goes where you don't expect it... 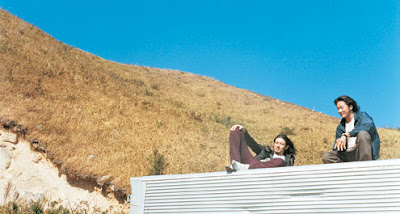 One reason you pretty much know that you won't quite get the "everything wrapped up in a nice bow" ending, is that Aoyama uses a number of editing tricks to help set the tone. Right from the opening titles, the viewer is slightly off balance due to the chopping up of long single takes. By dropping a number of frames and even seconds of film, a scene (or tracking shot) may jump forward in spurts and reach its end sooner than you would've expected. As well, there were numerous occurrences of both sound and film snippets from the next scene bleeding over into the current scene which would occasionally give a sense of predetermination.
Aoyama gives us some interesting perspectives on family and it’s worth while also providing numerous characters that we end up caring for despite their many flaws. Makes for a worthwhile film if you ask me.
Read more by Bob Turnbull at his blog.
Posted by Chris MaGee at 8:54 AM

Hey, nice review of a great film. I had a chance to see Sad Vacation at the Freer Gallery of Art's Tadanobu Asano retrospective, and thought it worth mentioning two additional facts. First, Asano-sa's costar is the fast-rising Jo Odagiri, who Western audiences will recognize from Shinobi and Seijun Suzuki's Princess Raccoon. Second, Sad Vacation is actually a sequel to Shinji Aoyama's first feature film, 1996's Helpless, in which Tadanobu Asano initiated the role of Kenji.

Btw, I finally posted the rest of the Asano Q&A videos this site linked to in an earlier post. You can see them all here:
http://www.youtube.com/watch?v=YsmTN1cyHcs&feature=PlayList&p=83F002D632E5FD5C&index=0&playnext=1