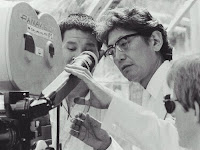 Don Brown at Ryuganji.net has posted a ton of new news items today, so by all means when you get the chance check them out. As I was reading through one thing jumped out at me: a documentary about the filming of 1960’s “Night and Fog in Japan ” and Nagisa Oshima’s split from Shochiku and his establishment as an independent filmmaker. Titled “The Oshima Gang” it’s being directed by Hayama Yoichiro, a former protégé of Oshima’s.

Sounds like fascinating stuff. Shochiku’s initiative to promote young filmmakers in the late 50’s and early 60’s gave not only Oshima but Masahiro Shinoda and Kiju Yoshida there first major exposure. The controversy surrounding the “Night and Fog’s” radical politics and Shochiku’s decision to pull it from theatres three days after it premiered was but the first brush with censorship for Oshima. He famously went on to direct the initially banned modern class, “In the Realm of the Senses”.

Head over to Ryuganji.net for more details about “The Oshima Gang” and a whole load of other goodies: http://www.ryuganji.net/2008/04/11/assorted-news-giblets-kitano-miike-oshima-nakashima-and-more/
Posted by Chris MaGee at 2:29 PM