“Ever get the feeling you’ve been cheated?” It was that question Johnny Rotten posed to the audience at the end of The Sex Pistols final gig at San Francisco ’s Winterland Ballroom, January 14th, 1978. It was one of the many seminal punk rock moments along with The Ramones touring England in 1976, Sid Vicious killing Nancy Spungen in October of 1978, and the opening of CBGB’s in 1973. The raw energy and power of the punk movement of the late 70’s and early 80’s was also captured on celluloid in such landmark films as Julian Temple’s “Great Rock and Roll Swindle”, Colin Brunton’s “The Last Pogo” and Derek Jarman’s “Jubilee”. You could also add Sōgo Ishii’s film “ Burst City ” to that list. It was probably the Japanese film to highlight the country’s punk rock scene circa 1982, featuring members of Japanese bands like The Roosters, The Rockers, The Stalin, and Inu, but about halfway through watching the film for the first time I couldn’t get Johnny Rotten’s sneering voice out of my head, “Ever get the feeling you’ve been cheated?”

Let me start off by saying that “ Burst City ” has one of the most exciting beginnings that I’ve ever seen. Starting of with what sounds like a machine weeping we speed down highways and industrial roads in the dark of night. We watch what appears to be two rejects from a Mad Max film speeding on their motorcycle to destinations unknown before cutting to grainy, black and white documentary footage of The Rockers getting ready to take the stage. Close ups of girls putting on lipstick and the band members tuning their instruments are followed by a slow motion walk backstage. When the band members walked over a torn poster of The Beatles I chuckled and once they took the stage, their guitars roaring and the feedback squealing, I nearly had an orgasm. The mood was electrifying! I settled in to watch what I was convinced was going to be a mind blowing experience. What I ended up getting was far from it. 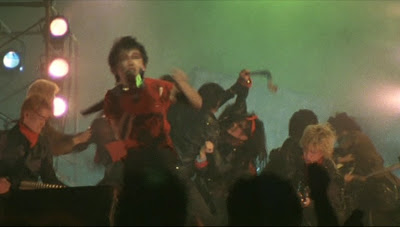 I can’t go into details of plot with “ Burst City ” because there really isn’t one. Scenes are loosely structured around either the punks gigging at their hang out, the “Live Spot 20,000V” (a precursor to Ishii’s 2001 film “Electric Dragon 80,000V), fighting, looking cool, and drag racing. It almost smacks of the innocent early days of rock and roll. The rest of the scenes revolve around the Mad Max rejects and their involvement in and sabotage of the construction of a nuclear power plant. That’s it. Now, most people would say that the plot isn’t the point of a film like “ Burst City ”. It’s the music, the style, and the spirit of the punk scene.

I would or could try to agree with this argument if it weren’t for two things: that damned subplot with the biker and his mute companion and the length of the film. I think I would have happily sat through scene after scene of the bands killing time and kicking ass on stage, but when you introduce the narrative elements of the nuclear power plant, the yakuza and these two wanderers most viewers will immediately start looking for a story there, but a story is never forthcoming. It just came off as a cruel tease. And in terms of the length of the films (nearly two hours) it just seemed bloated, pretentious, and well… boring, three things that punk rock should never ever be. For me Ishii’s “Electric Dragon 80,000V” ended up having all the excitement of “Burst City”, but at the same time lost all the dross, clocking in at a breathtaking, came-saw-and-conquered 55 minutes.

Yes, “ Burst City ” was a major influence on Shinya Tsukamoto and one million and one music videos that came after it. Yes, Sōgo Ishii is probably one of the most important voices in independent Japanese cinema. All this is true, but I’ll make a terrible confession. I fast forwarded through the last hour of “ Burst City ” and I didn’t feel I missed anything. In fact, if I’d have thrown on my old Hüsker Dü “Land Speed Record” CD it would have nicely complimented the images flashing on the TV. So in answer to Johnny’s question, Yes, I certainly fucking did get the feeling I was cheated…
Posted by Chris MaGee at 2:34 PM