Spirits abound within the beautiful hills of Shikoku. In the wind, in the trees and littered throughout the past as well. Not to mention in the women of the Bonomiya family.
One of these Bonomiya women is Miki - an attractive woman who works in an isolated paper mill on the island. She has never left the area and has now reached an age where being single means she is considered a spinster. The strands of gray sneaking their way into her hair seem to confirm this. But the arrival of a young male school teacher has re-awakened not only Miki (who seems to become younger in appearance as their relationship grows), but the spirits as well. Sudden winds gust through the area, accidents begin to happen and nightmares come to many of the residents. The mail girl wonders if the restlessness of her chickens could be due to wild animals being about - specifically wild dogs. 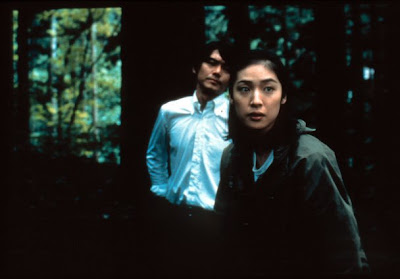 So we learn about the Inugami - a curse that has been left with the Bonomiya women. They must not only take care of the spirits left to them, but also be careful not to become angered as this may release the spirits. But the film is less a ghost story than an examination of the old ways of certain families or regions and how they crash up against more modern times. For the Bonomiya, the men have always made the rules. For example, for years they lived without electricity but then made alterations so that family member Takanao could have his own Internet business for awhile. The cursed women don't seem to have this luxury however - Takanao's wife is still not allowed a television set. So the men have a certain "flexibility" with which rules they choose to follow. You can probably guess which members of the family have had more infidelities...
The story and the appearance of the school teacher coincide with the preparations for the ancestor rites. The preparations and the final ceremony bring to light many of the hidden secrets and events of the past - many of them thought to be long buried. Some of these major secrets may not be overly difficult to decipher, but that's hardly the point of the film. It's a lovely slow moving account of these women - trapped in their lives by stories of the past, ancient rules of the family and a curse that may not be what they thought it was. The film is also simply beautiful - the early shots of the traditional method of making paper are quite stunning at times and there's a deep rich palette of greens found in the hills and surrounding woods. I'm now a confirmed fan of director Masato Harada ("Kamikaze Taxi", "Bounce KO Gals") and will eagerly search out more of his work.
Read more by Bob Turnbull at his blog.
Posted by Chris MaGee at 2:24 PM