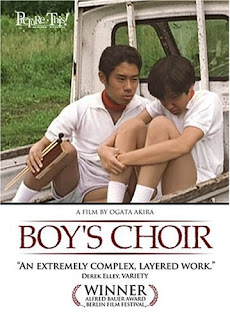 Reviewed by Chris MaGee
I watch a lot of Japanese films, maybe too many and I often feel that, besides wanting to share them with all of you in the Pow-Wow, that I’m trying to find that next film that will fill me with the same sense of excitement and wonder that, say, Kitano’s “Dolls”, Koreeda’s “After Life” or Miyasaki’s “Spirited Away” once did on first viewing. Well, the other night I popped in a DVD that I knew nearly nothing about, and had no real expectations for and suddenly I knew that I’d found another one of those truly special films.
“Boy’s Choir” directed by Akira Ogata in 2000 is set in the early 1970’s, a time of student riots and shifting morals, and follows Michio (Atsushi Ito) a 15 year-old boy with a stutter who’s just lost his father. His uncle enrolls him in a Catholic boarding school in the country where he meets a boy with a perfect falsetto voice, Yasuo (Sora Tôma). Michio is mercilessly teased by the other boys about his speech impediment and decides to run away, but it’s Yasuo who convinces him to stay. Michio is introduced Yasuo’s choral teacher, Seino (Teruyuki Kagawa) a man who through religion is trying to atone for his crimes as a student radical. He convinces Michio to join Yasuo in the school choir as a way to control his stutter, and in its quiet, fateful way life begins to lead these to boys through their first lessons in friendship, belonging, and developing their own voice. That is until a mysterious woman from their teacher Seino’s past arrives at the school, an event that will ultimately bring Michio, Yasuo and the other boys in the choir their first taste of tragedy.
There are so many superlatives and clichés that I could through at this remarkable film, but none of them would stick, nor is there more of the plot that I could explain in this review that would make sense. This film is made up of scene after beautifully wrought scene (the boy’s walk into an icy pond in order to stop their hearts, the choir singing in the courtyard of a tuberculosis hospital), so much so that I started to draw comparisons in my mind with the masterful short stories of famed Japanese author Yasunari Kawabata. Ogata builds each of these into one truly great story about the loss of youth.
If there were a way that I could come to each and every one of your houses and sit you down to watch “Boy’s Choir”... well, I wouldn’t. That would just be creepy, but... suffice to say you all should seek this film out and hopefully treasure it as much as I know I’m going to.
P.S.: In many other reviews there seemed to be a lot of talk about how this was a “gay” film. Are Michio and Yasuo gay? Probably, but that’s left up to the viewer to decide. Personally I think that this gay/ straight argument misses the most important point of this film: that of love, pure and simple, between to people.
Posted by Chris MaGee at 5:49 AM

Have you seen Ogata's only other feature to date, "The Milkwoman" (Itsuka Dokusho suru Hi)? It's a vast improvement on "Boys Choir" and one of the best films in recent memory in my opinion.

No, Don... I haven't seen it yet and it's killing me! I've only heard good things about it, but it hasn't been released in Canada yet and my expeditions to Chinatown haven't yielded a bootleg copy. Where are you? And where did you see it?