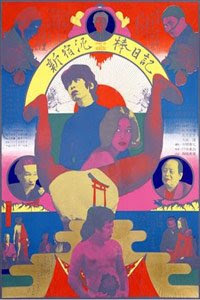 Reviewed by Chris MaGee
How do you start discussing “Diary of a Shinjuku Thief”? The 1968 Nagisa Oshima film could be approached two ways. As a tribute to French novelist, playwright and unrepentant criminal Jean Genet it can be seen as fitting neatly into a filmography that was defined by both sexual and leftist politics; the films imagery acting as a symbolic journey through the sexual and student revolutions taking place in Japan and around the civilized world in the late 1960’s. From a layman’s viewpoint it can be seen as the dictionary definition of a pretentious art film complete with folk singers in their underwear, transvestites, people doing hand stands for no apparent reason, and punishingly long black and white scenes of earnest intellectual debates. So which is it?

The story at the heart of “Diary of a Shinjuku Thief” revolves around an impoverished bookstore clerk, Umeko (Rie Yokoyama) and a foppish young thief named Birdey Hilltop (famed Japanese pop artist, Tadanori Yokoo). As the continuing title cards flashed on screen tell us at exactly 5:30 p.m. on a summer’s evening in Shinjuku Birdey shoplifts some books from a Kinokuniya bookstore. Umeko catches him and takes him to the store’s owner, played by real life Kinokuniya president and essayist Moichi Tanabe, for a talking to, but instead of calling the cops Umeko gets sucked into Birdey’s life of stealing for thrills. Their attempts at sublimating their sexual desires into petty thievery eventually fails and leads the audience down the rabbit hole and into a surreal exploration of the libido.

And having just typed up that synopsis I realize just how pretentious that sounds. Okay, so “Diary of a Shinjuku Thief” isn’t the most viewer friendly film. In a lot of ways it will remind Japanese cinema fans of the recent films of Seijun Suzuki, but unlike Suzuki who has never professed any great intellectual message to his madness Oshima always tried to imbue films with a certain amount of political and cultural cache and the end result is that we (or at least I) spend most of “Diary” chasing our brains trying to riddle the meaning of what’s going on onscreen. 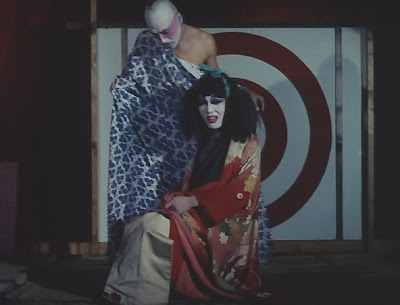 No doubt, it’s a real puzzle and I have to admit that in preparation for this review I spent a couple hours online doing research and through that my admiration for the film grew. Following clues that I had jotted down while watching the film I’ve found the late 60’s Japanese culture, specifically experimental theatre opened up to me. The aforementioned folk singer in his underwear was played by Juro Kara, one of the most influential playwrights in post-war Japanese theatre and founder of the Jokyo Gekijo, the street theatre company featured in the film. A contemporary of Shuji Terayama, Kara rejected the more naturalistic shingeki, or “New Theatre” and instead subverted traditional Japanese theatrical forms to address more modern concerns. Oshima’s son, Shin Oshima, actually directed a documentary dedicated to Kara and his groundbreaking work. Another point of interest is that “Diary” was written by the notorious Masao Adachi. Frequent collaborator with Koji Wakamatsu and member of the radical leftist Japanese Red Army.

So, while not easy by any stretch of the imagination “Diary of a Shinjuku Thief” represents a kaleidoscopic vision of the seismic changes that were occurring sexually, theatrically, politically and intellectually in the 60’s.
Posted by Chris MaGee at 9:46 AM