Momoko (pop star Kyoko Fukada) was born in the wrong century. She spends most of her time obsessing about 18th-century Versailles , the Roccoco, and listening to Strauss waltzes on her discman. The only problem is that Momoko is stuck in a small town in 21st-century Ibaraki Prefecture . Her days are spent making up stories to get money off her small time gangster dad so she can hop the train to Tokyo and shop at her favorite Gothic Lolita boutique “Baby, The Stars Shine Bright”. It’s worth the extra mileage. The last thing Momoko wants is to buy her clothes at the town’s Jusco (the Japanese equivalent to Walmart). Eventually dad cuts her off and Momoko resorts to selling his stash of counterfeit Versace t-shirts and bags online. That’s how she meets Ichiko (Anna Tsuchiya).

If Momoko fancies herself a frilly lady of the French court then Ichiko is the exact opposite: a growling, scrappy street tough. On her customized pink motorcycle… well, okay, her scooter… she rides with the town’s all girl bike gang, The Ponytails. A former shy high school nerd, Ichiko styles her every move around the leader of The Ponytails, Akemi. The only thing is Akemi is retiring from the life of a biker and Ichiko wants to find a fitting way to pay tribute to her hero. A fake Versace jacket and a few headbutts later and Momoko is virtually kidnapped and by Ichiko and so begins one of the craziest and kitschiest chick flicks to ever have come along, Tetsuya Nakashima’s “Kamikaze Girls” (2004). 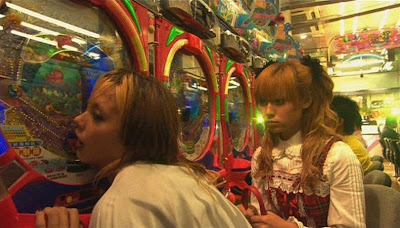 Nakashima adapts the novel by author, fashion designer and Lolita fashion icon Novala Takemoto by pulling out all the stops, using super saturated colours, dramatic camera angles and lighting, animation, Momoko’s pouty voice over and running on screen titles to intensify the comic kawaii cuteness of the two girl’s quest to find a legendary embroiderer in Tokyo so Ichiko can get “Akemi, arigato” stitched onto her biker’s overcoat. Nakashima also Fukada and Tsuchiya bouncing off each other with some great comic timing, but the real laughs in “Kamikaze Girls” come from the supporting players. Arakawa Yoshiyoshi as the driver of a cabbage truck, Kirin Kiki as Momoko’s loopy grandmother, and Sadao Abe as Ryuji “The Unicorn” steal every scene they’re in.

Now, it may be hard to believe, but I actually saw Nakashima’s 2007 film “Memories of Matsuko”, a film that I hated every minute of despite the critic’s praise, before seeing “Kamikaze Girls”, so I was a little guarded going in. 15 minutes into the film, though, and I was giggling along with the jokes and generally admiring the unique twists it brought to the road movie genre. The comic book imagery and anime, the day-glo colours, and the sheer overkill of lace worked wonderfully for “Kamikaze Girls”. In many ways the look of the film reminded me of a teenage girl’s room, or more generally that awkward age between being a girl and being a woman, the age when the pastel fantasies of childhood start to give way, or in the case of Momoko and Ichiko, gets reassessed as adulthood starts to loom. When Nakashima tried to apply this look and feel to the story of an adult woman’s slow mental and social decline it just didn’t translate… but I’m going off on a tangent. This isn’t a review for “Memories of Matsuko”.

If you’re in the mood for a lighthearted buddy film then you can’t go wrong with “Kamikaze Girls”. It may not be serious cinema or any kind of reinvention of the wheel, but it’s loads of fun.
Posted by Chris MaGee at 1:58 PM