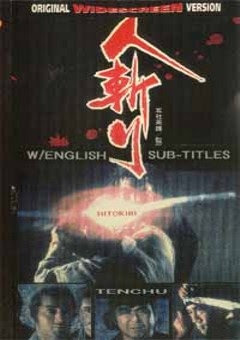 Reviewed by Chris MaGee
Many of you have probably seen Takashi Miike’s 2004 film “Izō”. Many of you probably don’t like it much, with all its plotless violence and artsy ambiguity it’s one of his more difficult films and consequently it isn’t a fan favorite. It also starts at the end of the story of a fascinating historical figure, Okada Izō (1832-1865), one of an elite samurai force, the hitokiri and one of Japan’s most feared assassins during the dying days of the Tokugawa Shogunate.
Izō, along with fellow hitokiri Tanaka Shinbei, was active in Kyoto just as Japan was emerging from 250 years of isolation and slowly transforming from a feudal system to a modernized form of government. Both men worked for Takechi Hanbei, a man who saw nothing good in these sweeping changes. As the leader of the Tosa Loyalists, Hanbei sought to overthrow the Tokugawa Shogunate, halt the opening of Japan to the rest of the world and to restore the sovereignty of the Emperor, and anyone who thought otherwise would risk “Heaven’s Revenge” or “Tenchu” at the hands of Izō and Shinbei.
History is written by the winners, though, and the Tosa were uncovered and disbanded, Hanbei and its members ordered to commit seppuku, but Izō suffered a different fate. Due to the sheer number of people who lost their lives at the end of Izō’s sword he was sentenced, and those of you who saw Miike’s “Izō” will know this, to crucifixion. It’s a story filled with drama and intrigue, double crossing and bloodshed, perfect fodder for an epic film. Hideo Gosha, director of “Goyokin” and Japanese cinema legend Shintaro Katsu definitely thought so. They assembled one of the most interesting casts in Japanese cinema history and adapted Okada Izō’s story to the big screen in 1969’s “Tenchu! (Hitokiri)”. 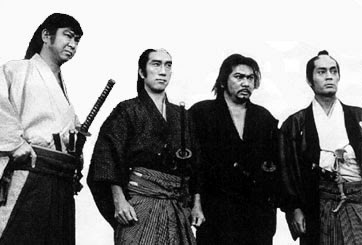 Tatsuya Nakadai is the brilliant, but ice cold Takechi Hanbei who at the start of the film orders the death of a high ranking official, a move that will eventually destroy the Tosa Rebellion. Author, essayist, and three time nominee for the Nobel Prize for Literature, Yukio Mishima stars as Tanaka Shinbei. You don’t get much closer to a real samurai than Mishima who assembled and trained his own private army; but Mishima truly disturbs with a scene of seppuku filmed only one year before he would take his own life in the exact same way. “Tenchu!” isn’t about Hanbei or Shinbei, it’s the story of Okada Izō and stepping into his geta is the co-producer of the film, Shintaro Katsu.
Katsu takes us from Izō’s meager beginnings, through his three short years of success, and finally to his terrible end. Throughout Katsu relishes the challenge of portraying Izō. Not satisfied with swordplay alone he shows us all different facets of the dreaded killer: a blubbering baby in the arms of his mistress, comic relief when he realizes that he’d botched an assassination because he forgot to shout “Tenchu!” beforehand. Still the killer is never far away. In a second Katsu’s performance turns on a dime and he shows us Izō’s ferocious, feral side, Takechi Hanbei’s wolf always ready to kill.
I found myself totally carried away when watching “Tenchu!” plus I got to learn some very interesting history as well, but it’s by no means a textbook. It has wonderful performances, an utterly engaging plot and fantastic chanbara action. One thing struck me though. Once Daei went bankrupt and Kastu went on to form his own production company, Katsu Productions, he ended up being the star of almost every knew franchise the company produced. Talk about a vanity project! Seriously, think about it… “Lone Wolf and Cub”, “Hanzo the Razor”, plus several more Zatoichi films. “Tenchu!” may not have been the start of another franchise, but it’s probably my favorite of Katsu’s performances.
Posted by Chris MaGee at 8:22 AM