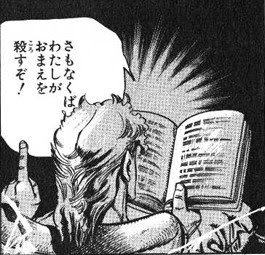 You would think that the producers of “JoJo’s Bizarre Adventure” would have learned something from the firestorm of controversy that erupted after Danish newspaper Jyllands-Posten published those cartoons depicting the prophet Muhammad back in 2005. The anime series has provoked angry reactions from Muslims after an episode that showed the main villain plotting murder while reading the Qur’an. Sheikh Abdul Hamid Al-Atrash, the chairman of the Fatwa Committee at Al-Azhar University in Cairo has come out in the press saying that the use of Islam’s holiest text in the scene "depicts Muslims as terrorists."

To quell the controversy Kazuo Kodama of the Japanese Foreign Ministry has isued a statement expressing regret that the decision to use the Qur’an in this way has offended Muslims. DVDs of “JoJo’s Bizarre Adventure” are currently being pulled from circulation by Another Push Pin Planning, the producers of the series.

Thanks to Variety Asia Online and Anime News Network for the original reports.
Posted by Chris MaGee at 7:48 AM