Wim Wenders to adapt Murakami’s “In the Miso Soup” 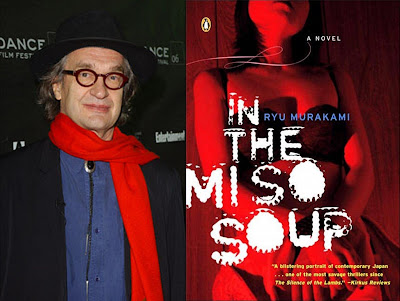 News from Variety Asia Online today that German filmmaker Wim Wenders (Wings of Desire, Paris, Texas) will be directing a screen adaptation of Ryu Murakami’s 1997 novel “In the Miso Soup”. Set in the and around Tokyo’s Shinjuku the story follows 20-year-old Kenji, a tour guide as he squires a middle-aged American serial killer, Frank through the seedy world of hostess bars and lingerie clubs. The French, Korean co-production is set to start shooting in Tokyo next Spring with Acadamey Award nominated actor Willem Dafoe heading up the cast as Frank. No word yet on the remaing cast that is said will be made up entirely of Japanese actors.

In an interview with The Hollywood Reporter Wenders describes his vision of “In the Miso Soup” as , “a genre movie. Full on. It will be a horror film,” so it will be interesting to see what he comes up with. Wenders films have been pretty hit and miss in the past few years, but seeing that he’s done a wonderful job capturing Japan on film in his 1983 documentary “Tokyo-ga” and in his sprawling 1991 road picture “Until the End of the World”. It also doesn’t hurt that this is a Murakami book, the man who’s had his works adapted to the screen in such films as Takashi Miike’s “Audition”, Hideki Anno’s “Love & Pop”, and Tetsou Shinohara’s “Karaoke Terror”.
Posted by Chris MaGee at 7:21 AM