ANNOUNCEMENT: "A Wreath for Madame Kawakita" comes to Cinematheque Ontario 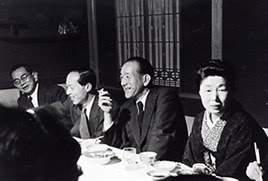 Koshiko Kawakita may not be a name that many of you are familiar with, but without her blogs like this would most likely not exist. She and her husband Nagamasa Kawakita were responsible for not only educating the directors of Japan’s golden age of cinema by importing the films of European greats like Rene Clair, G.W. Pabst and Fritz Lang through their company Towa Film Corp., but starting in 1960 they organized touring festivals through their not for profit organization The Japan Film Library Council that introduced Japanese cinema to Europe and North America. After Nagamasa’s death in 1981 Koshiko ran the newly redubbed Kawakita Memorial Film Institute until her passing in 1993.

Following in the tradition of those groundbreaking touring festivals Cinematheque Ontario in cooperation with the Kawakita Memorial Film Institute are presenting “A Wreath for Madame Kawakita” from July 4th to August 18th. Toronto audiences will not only get to see such well known classics of Japanese cinema as Kaneto Shindô’s “Onibaba”, Seijun Suzuki’s “Tokyo Drifter” and Akira Kurosawa’s “Rashomon”, but also rare gems like Nagisa Oshima’ “Boy”, Kon Ichikawa’s “A Full-Up Train” Yoji Yamada’s “Tora-san’s Sunrise and Sunset” from the famed series, and lastly the acclaimed experimental documentary “Into the Picture Scroll: The Tale of Yamanaka Tokiwa” directed by Sumiko Haneda.

The Cinematheque Ontario website hasn’t been updated just yet with dates and ticket details, but check out their official press release for all the films included in the programme.
Posted by Chris MaGee at 8:27 AM