REVIEW: They Who Stepped on Tiger’s Tail - Akira Kurosawa (1945) 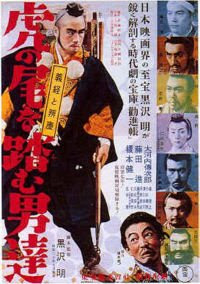 Akira Kurosawa made his directorial debut during the height of World War 2. But by the time he was preparing to direct his fourth feature, the war was winding down. Japan , still trying to hold onto some semblance of victory, was losing its grip on the Pacific. Kurosawa was in pre-production of a costume drama titled Doko Kono Yari, when it suddenly fell into limbo. Sensing the long arm of the government was weakening, Kurosawa saw an opportunity to make a film with little interference. He scrambled, completing a new script in a scant few days, with one guideline from the government: one location. Utilizing the same props, sets and actors from his failed film, Kurosawa went on to make Tora No O Wo Fumu Otokotachi, also known as They Who Stepped on Tiger’s Tail.
Tiger’s Tail is based upon the popular Kabuki play Kanjincho, itself based upon the Noh play Ataka. The tale (bad pun) revolves around the conflict of two brothers of the Minamoto clan, Yoritomo and his younger brother Yoshitsune. Yoritomo, jealous of his younger brother’s legendary status among the Japanese people, locks down Kamakura , a region Yoshitsune helped conquer for the head of the Minamoto clan, Yoritomo himself. Yoshitsune, along with his followers, are forced to flee to a neighbouring region. They dress themselves as monks, Yoshitsune as a porter, and evade Yoritomo’s minions as they make their way to the border. However, by the time they arrive, Yoritomo has alerted the local noble, Togashi Saemon, warning him that they are posing as monks. Togashi, unsure what to make of the monks that have arrived at this gates, poses a series of tests for them, questioning their devotion to the Buddha. Fortunate for Yoshitsune, his most devoted follower is another popular historical figure, Benkei, a sohei, or warrior monk, and so has little problem passing the nobles tests. He ‘reads’ Buddhist texts from blank scrolls and proves himself worthy enough to pass. However, as they are about to leave, the porter is recognized as Yoshitsune. Before his identity is revealed, Benkei beats Yoshitsune with his staff, cursing him for arousing suspicion. As no follower would dare beat their master, they are permitted to pass. After they finally make it to safety, Yoshitsune thanks his faithful retainer, shedding a tear for the anguish he has caused himself. Togashi sends them wine and Benkei drinks plenty, washing away his sorrows, and then culminating in his performance of a drunken dance. 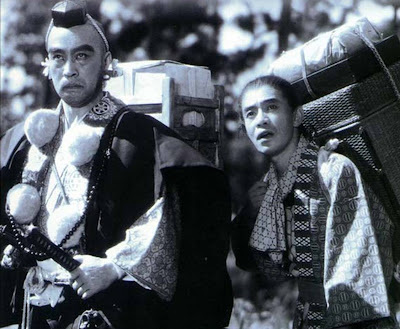 Tiger’s Tail, at first glance appears to be no more than a simple adaptation of a popular play, but ends up being a stepping stone for Kurosawa. It foreshadows some stylistic devices he uses later in Throne of Blood. It’s also the first film which channels his social conscience. One major change he made to the play was the introduction of a peasant porter, played by popular Japanese comedian, Kenichi Enomoto. The porter, providing humour throughout an otherwise tense film, is an obvious precursor to other comedic characters who find themselves in dangerous situations, something Kurosawa uses to great effect in Seven Samurai and The Hidden Fortress. The porter tags along with the band, ever inquisitive about the warrior caste in which he travels. He provides the social conscience that Kurosawa always had but was never able to express. The porter, a commoner, in a matter of minutes, is able to see through the lies of Yoshitsune and his men, something that the governing body, with the exception of Togashi (although that is debatable) never figures out.
Kurosawa proves, even after his fourth film, that he is a master of cinematic storytelling. His classic techniques, such as the use of long lenses to flatten the image, the transitional horizontal wipe or his expert use of montage, are quite evident. From its gorgeous opening tracking shot through the forest, the tension slowly builds. He uses only close-ups to masterfully prolong the sequence of Benkei reading the blank scroll. While Togashi rests his eyes and listens to Benkei’s words, searching them for truth, one of his henchman, who is unmoved by what he hears, inches forward and attempts to see what the monk reads. Kurosawa cross-cuts between Benkei reading, Togashi napping, the henchman inching forward and the porter scrambling to get Benkei’s attention.
Unfortunately, the films release was delayed until 1952. The Japanese government initially postponed its release, feeling it made light of an important historical event. Then the provisional US government deemed it too feudal, and so it sat in a vault until the signing of the treaty of San Francisco , which came into effect April 28th, 1952 .
Read more by Matthew Hardstaff at his blog.
Posted by Chris MaGee at 8:21 AM