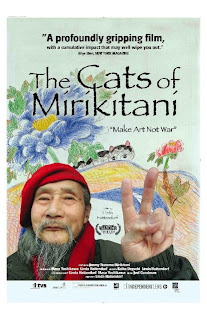 "The Cats of Mirikitani”, the winner of the Audience Award at the 2006 Tribeca Film Festival, may start out as a pretty run of the mill doc about the homeless in New York, but when documentary filmmaker Linda Hattendorf starts filming an 80 year-old street artist named Jimmy in 2001 she could have never have known how it would change her life as well as his.

We watch Jimmy in sun, snow or rain, stooped over large sheets of paper giving life to elaborate drawings of persimmons, cats and camp barracks set up in barren desert landscapes. As the summer of 2001 turns to autumn the world changes with the attacks on the World Trade Center. Lower Manhattan becomes a dust covered ghost town with Jimmy still stooped on his corner with his drawings. To protect him Hattendorf makes the decision to take him in and thus the odyssey of Tsutomu “Jimmy” Mirikitani’s life unfolds before us.

Born in Sacramento, California in 1920 and raised in Hiroshima he returned to his birth country at the beginning of WW2 to, as Jimmy described it, bridge the gap between Eastern and Western artistic traditions; but after the attack on Pearl Harbour ended up in the Japanese interment camp at Tule Lake, California. Here he was not only stripped of his life, dignity and ultimately his citizenship, but also of his family, never seeing his sister again after their internment. This pivotal period of his life leaves him mistrustful of the government and authority of any kind and eventually results in his homelessness. 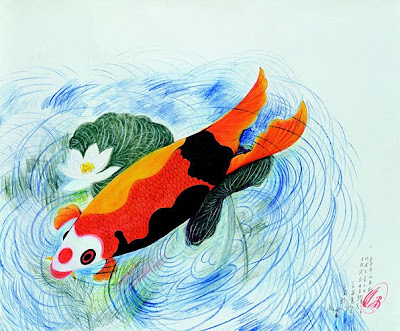 The thing that is so remarkable about this documentary is how Hattendorf perfectly captures the paranoia and prejudice against Muslims after the attacks of 911 and shows us how easily the political and social climate of the 1940’s and the interment of thousands of Japanese could have been repeated yet again. The other remarkable thing is watching the friendship between Jimmy and Hattendorf grow: trips to the Brooklyn Botanical Gradens that result in theft of plants, trips to the video store to track down Toshiro Mifune movies, and Jimmy’s recollections of his lost family whose lineage stretches back to a proud samurai clan.

There are twists and turns in the story of Jimmy Mirikitani that shouldn’t be spoiled by a plot point by plot point review. Suffice to say that the tired old cliché’s of “you’ll laugh, you’ll cry” fit this documentary to a T. If you get a chance to see this remarkable film please don’t pass it up.
Posted by Chris MaGee at 7:03 AM