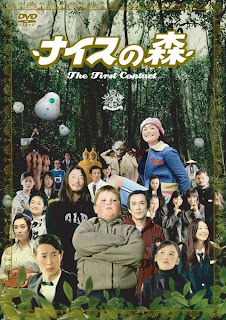 At the first Toronto After Dark Film Festival in October 2006, Twitch's Todd Brown called "Funky Forest: The First Contact" the strangest film he'd ever seen. Two and a half mind boggling hours later, several hundred attendees had just updated their own lists too. It was a great screening - a theatre full of people truly never knowing what the hell they were going to see next and completely loving it. But would a series of surreal sketches hold up as a home DVD viewing experience a year and a half later?

Turns out the answer is Yes. It's a different experience of course, but the film builds up such a great deal of good will with its silly incongruous moments and deadpan humour that I couldn't help but enjoy it all over again. As well, I started to see a bit more of a common theme running through the material - mostly as it relates to dreams and the mixing of them with reality. That, and a lot of dancing.

How can you resist a film with the recurring "Babbling Hot Springs Vixens"? Or the "Guitar Brother" segments with Tadanobu Asano and his chubby younger white sibling? Or the strangest music class you'll ever see where a series of odd creatures are played by attaching themselves to your body? Or the dog who is an animation director and needs a gargantuan headed woman to translate his ideas? Or the badminton practice that has a young woman trying to volley back the liquids coming out of a man's long nipples after squeezing his...Well, you'll just have to see it for yourself. And how about the three minute intermission with a countdown clock? And the shorter 19 second intermission later on where the actors simply freeze mid scene? 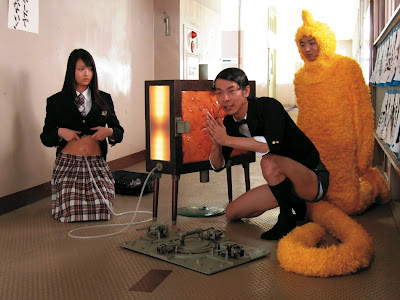 All these ideas and images combine into a surreal experience to say the least, but it's also very funny. The straight faced line deliveries help, but there's also some moments of sudden quick edits that sharpen the humour in a scene.The idea of mixing shows up in several forms - the DJ mixing music in his apartment, the different repeating characters showing up in each others vignettes (and all of them showing up in "Homeroom!!!!!!") and the extended mix of sounds when we finally enter the funky forest that are created by "the one who controls the sounds of all living creatures", "the one who plays with the sounds of nature" and "the one who takes command of every sound made by man's technology". The entire film is a dreamland mix of bits and pieces of everyday life with the fantastical as well as the natural with the technological (including a completely insane section involving a young girl's belly button that connects via a living cable to a grotesque pulsating...you'll just have to see it for yourself). Just let it wash over you like it was your own dream.
Read more from Bob Turnbull at his blog.
Posted by Chris MaGee at 8:53 AM