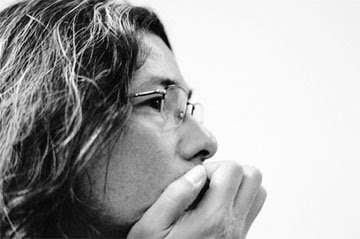 by Chris MaGee
The story behind this Shunji Iwai directed video for The Moonriders 1996 song “Knit Cap Man” plays out like a game of Six Degrees of Separation. The Shunji Iwai connection is what prompted me to post it here, but there’s more at play than just that. The Moonriders are a veteran Japanese rock band who in 1996 was celebrating their 20th anniversary. To commemorate that Moonriders fan Iwai, who was fresh of his success with “Love Letter” wanted to direct a video with the feel of an old silent Ozu film. To play the man with the hat and glasses he enlisted essayist Shigesato Itoi, who also co-wrote the song with Moonriders lead singer Keichi Suzuki. Suzuki has gone on to compose soundtracks for Takeshi Kitano’s “Zatoichi”, Satoshi Kon’s “Tokyo Godfathers” and Higuchinsky's “Uzumaki”. He also appeared in “Love Letter” and “Swallowtail Butterfly” which brings us full circle back to Shunji Iwai. Kevin Bacon had nothing to do with the song or video.