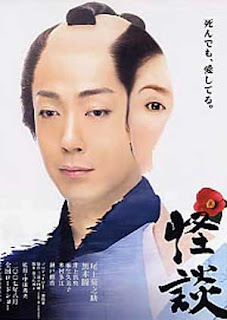 Author Encho Sanyutei (1839-1900) lived through one of the most drastic changes in Japanese history, as foreign envoys literally forced their way into the country, helping to bring about the end of the Edo period and the beginning of the modern Meiji era. This transition deeply affected his work. Many of his most popular tales were traditional ghost stories and have been adapted for the silver screen by Kenji Mizoguchi, Kinji Fukusaku and the father of Japanese horror films, Nobuo Nakagawa. When prolific horror producer Takashige Ichise approached Hideo Nakata about doing a new film, Nakata had an epiphany. Having always possessed a deep love for jidaigeki and melodramatic films, he wanted to adapt Sunyutei’s 1859 classic, Hinkei Kasane ga Fuchi. This tale alone had been adapted more than 10 times for both television and cinema. It would give Nakata a chance to make a romance, while still holding onto some of the more marketable horror elements.
The fatalist tale of Hinkei Kasane ga Fuchi follows the karmic retribution of two families. Soetsu, a money lender, is murdered by Shinzaemon, a Samurai in his debt. Soetsu, with his dying breath, curses Shinzaemon. The samurai disposes of Soetsu’s body in Kasane swamp, but soon goes mad, killing his wife and then himself. Twenty years pass. Shinzaemon’s only son Shinkichi (Onoe Kikunosuke V) and Soetsu’s eldest daughter Toyoshiga (Hitomi Kuroki) meet accidentally and quickly fall in love. They are both unaware of the tragic link they share.
Hideo Nakata’s name is synonymous with the J-horror boom. He seemed content to ride the wave of success he garnered with the modern masterpiece, Ringu, with a series of films that fed off of the Ringu archetype, infusing the alienating modern materialistic landscape with classic Japanese ghost story sensibilities. Many of the now standard J-horror motifs were inspired by tales such as Sanyutei’s. The vengeful female ghost with long disheveled black hair is drawn directly from Oiwa and the popular Kabuki play Yotsuya Kaidan. But after Nakata’s horrendously tragic US remake, The Ring 2, it seemed he was ready to recreate the brand of Hideo Nakata. Instead of infusing a modern tale with classic sensibilities, he does the opposite, injecting J-horror archetypes into a jidaigeki. 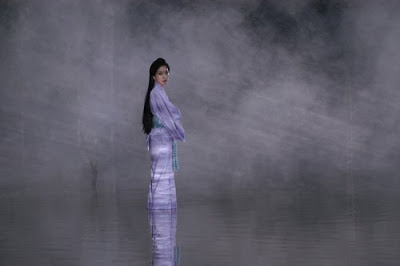 While Kaidan does not completely rebrand Nakata’s name, it is obvious that he is using this film as a bridge. Kaidan effectively means to narrate the strange and mysterious, and Nakata sets it up as such. The film opens with a storyteller disclosing the initial narrative of Soetsu and Shinzaemon, shown in black and white flashbacks. This alludes to the popularity of hyakumonogatari kaidankai, the gathering for one hundred Kaidan tales, during the Edo period. Even Encho Sanyutei was not only an author but a rakugo, a verbal entertainer. When we finally jump forward 20 years later, the performer becomes the narrator, and he quickly establishes the fatalistic tone of the film. We immediately become aware of the relationship between the characters, something that is never revealed to them. And then Nakata makes us wait, letting the melodrama play out. Shinkichi and Toyoshiga fall in love. Toyoshiga is a successful singing instructor, while Shinkichi is a poor tobacco salesman. Shinkichi soon begins working for Toyoshiga at her school, but as she is much older than Shinkichi, she quickly becomes jealous of the attention he receives from her female students. She scolds her students, causing some to leave, including her own sister. Madness consumes her. She receives an injury to her eye, almost identical to the one her father received from Shinzaemon. The injury quickly becomes infected and she dies. Nakata seems to take a cue from Takashi Miike’s Audition, as the tale is strictly melodramatic for the first half. It lulls you into complacency. And then he strikes, and by the time he does, we are no longer expecting it.
Kaidan is really a wolf in sheep’s clothing. It appears on the surface to be a drastic change for Nakata. Narratively it is very different from what he is known for, which may not work if people are looking for another Ringu. While the ghost of Toyoshiga is vengeful, she never kills anyone. She curses Shinkichi, that she will haunt him every time he finds a new lover, driving them away. And each time he finds a new lover, the ghost of Toyoshiga drives him mad until he kills them. As the bodies pile up in Kasane swamp, it becomes harder and harder to keep the locals in the dark. The film culminates in a chambara inspired fight scene between Shinkichi and the locals. The ending, instead of shocking, is haunting and lyrical, having more in common with Ugetsu than a J-horror film. However, Nakata made the film for a modern audience, and there are moments that are still reminiscent of Ringu. He recycles the same creepy sound effects. A few pale hands reach out for an effective scare. And while Kaidan is beautifully crafted, Nakata can’t seem to completely leave behind his J-horror roots. Yohei Taneda’s production design is incredibly authentic and gorgeous. Filmed by Junichiro Hayashi in a minimalist style, each shot is incredibly effective because it conveys just the right amount of emotion and tension without being too stylized. But it just falls short of being a great film because Nakata falls back on what made him successful, and not what is necessarily effective.
Read more by Matthew Hardstaff at his blog.
Posted by Chris MaGee at 8:42 AM