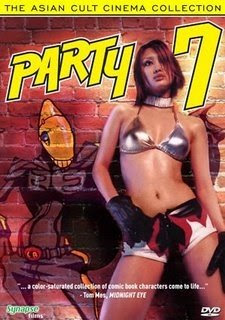 A strange set of circumstances, coincidences, and karmic payback are taking place at the Hotel New Mexico… that or everyone needs to get a travel agent who’s heard of client confidentiality. Either/ or, but the paths of seven very different people do cross in Katsuhito Ishii’s sophomore directing effort “Party 7” (2000).

Miki (Masatoshi Nagase) is a gangster on the run. He’s stolen a suitcase full of money from his yakuza gang and is hiding out at the Hotel New Mexico, hoping that his old crew won’t track him down. Unfortunately Miki’s fellow gangster Sonoda (Keisuke Horibe) has been sent to retrieve the stolen loot… and to eliminate his friend, but Sonoda isn’t alone. Hot on his heels is feared assassin, and avid plastic model collector, Wakagashi (Tatsuya Gashiun) who has it in for both of them. Into this situation stumble Miki’s ex-girlfriend and notorious social climber Kana and her new fiancé, camera nerd Todohira, who is working under the assumption that his soon to be wife was a virgin before meeting him (not bloody likely…); but unbeknownst to them this unlikely group is being watched. The Hotel New Mexico was built as the own private peeping ground of masked and caped Captain Banana (Yoshio Harada) and now his unwitting apprentice Okita (Tadanobu Asano) has come to join him in his secret headquarters in the heart of the hotel.

Now audiences assume that when you get an ensemble cast crammed into a single room that you’re sitting on a pressure cooker of human emotion, that in this confined space we’ll watch as everyone’s personality gets slowly peeled back to reveal the actual person within (think “The Petrified Forest”, “Cube” or even “Dawn of the Dead”). With Katsuhito Ishii you’ll get nothing of the sort. Instead you have colourful characters (literally… just check out Miki’s pink leather jacket!) getting caught up in absurd situations and even more absurd conversations about everything from the the actual price of a gold-plated camera to a specific spot where shit magically falls from the sky. 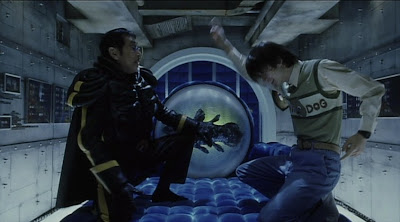 Now, I came down pretty hard on Katsuhito Ishii’s debut film “Sharkskin Man and Peach Hip Girl” saying that is suffered from an “obsession with visuals and flash” and for having “caricatures instead of characters”, but I also loved his zany family comedy “A Taste of Tea”. “Party 7” is like the missing link between that disastrous proto-Ishii heist film and his more recent forays into free form lunacy. While there’s a lot that’s been recycled from “Sharkskin Man and Peach Hip Girl” like the rogue gangster with the stolen yakuza money and the hitman with a strange hobby (collecting ice cream signs in “Sharkskin” and plastic models in “Party 7”) this follow up film sacrifices the one thing that weighed down its predecessor: plot. Ishii’s strength is not in telling a story and here he approaches a kind of sketch comedy that had me laughing to myself for its full run time… especially the unlikely comedy duo of Yoshio Harada and Tadanobu Asano.

This one won’t disappoint fans of Ishii’s recent films, but for those looking for things like plot, believable characters and just plain common sense you best look elsewhere.
Posted by Chris MaGee at 8:07 AM