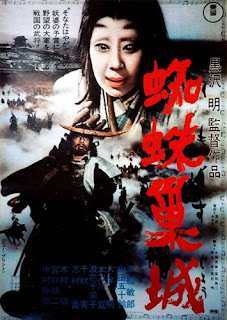 The first images the viewer sees upon watching Throne of Blood is a desolate, mist-shrouded plain, winds blowing ominously on the soundtrack. Gradually, the camera closes in on a lone pillar marked with the words HERE STOOD SPIDER’S WEB CASTLE as a chanting chorus describes the carnage and destruction that took place long ago at this site. This sequence is repeated in the film’s conclusion, providing a bookend structure that conjures the castle just long enough for its tragic tale to play out before it is once more consumed by the fog and the past, enclosing the narrative in a realm ultimately governed by fate and lost to history.
This 1957 masterwork from Akira Kurosawa draws from Shakespeare’s Macbeth, medieval Japan ’s civil war period (situated in the 15th and 16th centuries) and Noh theatre. These diverse influences from art and history all blend together into a wholly unique final product: a powerful work of cinema that certainly exhibits traits of theatre and literature, yet, as all of Kurosawa’s best films do, uses the medium of cinema to its fullest potential.
In many ways, Throne of Blood acts as a precursor to Kurosawa’s 1985 film Ran (another Shakespeare adaptation, this time of King Lear), as both films share the same themes of war, betrayal and the destructive consequences of human nature. While we’ll never get to see Toshirô Mifune play Lear (fellow Kurosawa veteran Tatsuya Nakadai ably played Ran’s Lear surrogate Emperor Hidetora), he provides the next best thing in Throne of Blood as Washizu, a power-hungry warlord whose encounter with a spirit who prophesizes his imminent triumph ironically initiates his self-induced downward spiral. Throughout the film, his lofty ambition is steadily matched with a rising paranoia that is fuelled by his manipulative wife Lady Asaji, (Isuzu Yamada), who can easily be seen as a precursor to Ran’s notorious Lady Kaede (Mieko Harada). The film’s sense of fatalism and impeding doom is represented onscreen in a semi-expressionistic manner, concocting from its clouds of roiling fog and stark interior sequences a strong, well-crafted visual sensibility that is consistently maintained throughout the film. However, there are several stand-out moments that emphasize the spectacles of both war and the supernatural to great effect; among them are the encounters with the forest spirit (a ghostly, androgynous figure dressed in white robes), a flurry of black birds that serves as an ill omen for Washizu and, perhaps most famously, Washizu’s grisly, arrow-laden final scene. 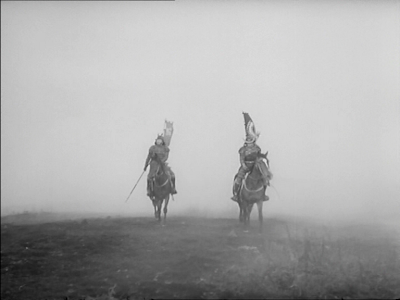 Throughout the film, blood serves as a constant reminder of man’s unchanging brutality, underlining how those who do not learn from history are indeed doomed to repeat it. This is most strikingly illustrated by the sinister black stains of “dog’s blood” that cover the walls and floor of the chamber that Washizu and Asaji eventually inhabit, spilled from a previous lord who succumbed to treachery and eventually killed himself. Soon enough, Washizu and Asaji are equally tainted both literally and figuratively once they weave and put into action their own schemes of betrayal, leaving behind them a trail of blood, deceit and death. As with Ran, Raging Bull and There Will Be Blood, there is little if any redemption to be found here; only a monument to the follies of humanity at its worst. Not one to squander such ripe story material, Kurosawa presents it with a sense of tact and eloquence that certifies Throne of Blood’s status as both a significant achievement in his career and a magnificent, masterfully-realized feat of filmmaking.
Read more by Marc Saint-Cyr at his blog.
Posted by Chris MaGee at 7:12 AM