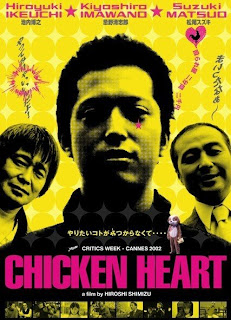 "Nothing I ever do works out," ex-boxer Iwano (Hiroyuki Ikeuchi) confides in his friend Sada (Kiyoshiro Imawano). "That's because," Sada replies, "you never do anything." It's that basic truth that holds Iwano, Sada, and their buddy Maru together throughout Hiroshi Shimizu's 2002 comedy "Chicken Heart". It's not that they enjoy hopping from one part time job to another and spending their nights playing referee for Iwano, who charges drunken salarymen ¥2,000 to go one two minute round with "The Human Punching Bag", but it's this hand-to-mouth life of frustration and missed opportunity that they know best. When the three of them slouch down at the counter of an outdoor food stall (whose proprietor is played by famed photographer Nobuyoshi Araki) they may never crack a smile, but on some level they sit proudly as a trinity of failure. (It's also here where some of the funniest moments of the film take place.)

Things start to change for the friends when... well, in a review for a regular Hollywood film it would be something like "everything changes for these losers when they come across a briefcase full of stolen cash," or "when they're recruited by a mysterious man to help track down his missing daughter, " or some such thing straight out of a Robert McKee screenwriting workshop. Shimizu, who also wrote "Chicken Heart", doesn't come at the three friends with that kind of heavy hand, all that Iwano, Sada and Maru need is a gentle push and from there he lets Newton's Laws of Motion take over from there. First Maru, who sells shoes at his families shoe store and is obsessed with lucky charms has his luck go sour. His aunt and uncle inform him that that they plan to close down the business, so he has to find another job, as well as another place to live. Meanwhile Sada, whose day job is handing out packets of Kleenex advertising a money lending business, starts frequenting the docks, particularly an old worthless boat and before we know it he's bought it from its owner and sets about fixing it up. As for Iwano, who not only spends his time dodging punches from office workers, but also from his brother's job offers, well, he spends his days scrubbing graffiti off walls and nursing his regret for having thrown his boxing career away; that is until Sada hooks him up with a one time collection gig for the money lending business. It's easy, just go to the woman's apartment and demand the money she owes. Iwano doesn't anticiapte how charming and resiliant this woman can be though. She insists that if he wins a game of go against her then she'll pay the loan back the next day. Of course she wins and Iwano keeps returning day after day to her apartment for more go matches until an unlikely friendship starts to form. 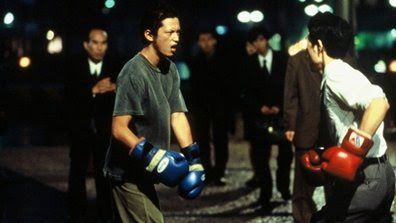 The story of "Chicken Heart" kind of reminded me of the films of Jim Jarmusch, with their down on their luck cahracters and their meandering plots, but in terms of execution (cinematography, editing, music) it was clear who Shimizu draws his inspiration from: Takeshi Kitano. It makes sense though. Shimizu got his start as assitant director on Kitano's films "Kids Return" and Hana-Bi" amongst others. In fact, there's enough static camera work, deadpan delivery and instantly hummable music that you might think he simply ripped off his old sensei's style, but what makes "Chicken Heart" such a success is that Shimizu doesn't borrow Kitano's often mean spirited sense of humour, so instead of laughing at Iwano, Sada and Maru we identify with their doubts, fears, and dare I say hopes that are buried in there somewhere.

If you're a fan of Kiatno's style then you'll love "Chicken Heart", but there's more here than an homage to a great director. Shimizu has created a different breed of feel good comedy where the pay off doesn't come from the final triumphant success, but from that twinkle in the characters eyes that makes you know that they've realized that there may just be more to life than they'd thought.