Prime Minister announces that Emperor Akihito to visit Canada in 2009 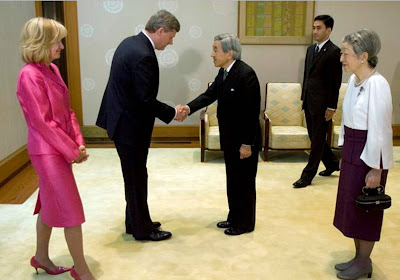 I’m about as far as you can get from being a monarchist, but this is fairly historic news that any Canadian interested in things Japanese should know about. In a statement issued by the office of Prime Minister Stephen Harper on July 10th he said that following an audience with Japanese Emperor Akihito and his wife Empress Michiko during the recent G8 Summit in Hokkaido that Harper is pleased to announce that Emperor Akihito will be making an official visit to Canada sometime next year.

I say that this is an historic occasion because this will be the first time in 56 years that Akihito made an official visit to Canada. The last and only other time was in 1953 when the then Crown Prince Akihito, the eldest son of Emperor Shōwa (Hirohito), was 20 years-old and toured several major Canadian cities before traveling to England to attend the coronation of Queen Elizabeth II.
Posted by Chris MaGee at 9:19 AM