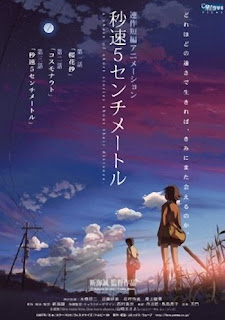 For over a decade anime giant Hayao Miyazaki has been threatening retirement. Every film, the blockbusters “Princess Mononoke” and “Spirited Away” were widely publicized to be his last and even his son Goro has stepped up, despite strong disapproval from dad, to carry on the family tradition. So far the notoriously workaholic old man hasn’t put down his pen and brush, in fact his latest film “Ponyo on the Cliff’ is due this July. Still the day will come when a new animator will either succeed or eclipse him and many in the anime world believe that one animator in particular could claim the coveted title of “the next Miyazaki”. That would be 35 year-old Makoto Shinkai.
Starting out as a graphic designer for a large video game company he made a number of short films, but it wasn’t until 2001 when he left his day job and wrote, directed, and animated the 25 minute film, “Voices of a Distant Star”, the story of a 15 year-old girl who is drafted into an intergalactic war and must leave her boyfriend behind. The two keep in touch via text messaging on their cell phones, but as the girl travels deeper and deeper into space her messages take longer and longer to reach Earth until they are delayed by years. What characterized Shinkai’s style immediately is the lush imagery, the exacting depiction of scenery and everyday objects and his luminous use of light.
Coming six years and two films later 2007’s “5 Centimetres Per Second” brings the themes of separation and communication between people across stretches of time and space a little closer to home. Made up of three “episodes” and titled for the speed at which (apparently) sakura petals fall to the ground. “Centimetres” shows us the life of Takaki at three different stages: starting from a boy of about 12 years-old, through to his teen years, and finally into early adulthood. I had to stop myself from writing “tells the story of Takaki” because, like “Voices from a Distant Star”, the plot here is fairly minimal. 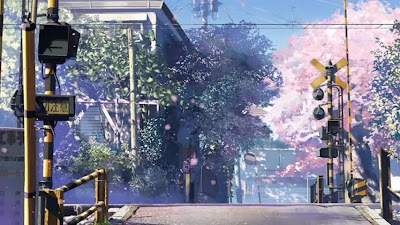 The first episode, “Ōukashō” sets things up as Takaki and his school sweetheart, Akari, graduate from elementary school. Both move onto junior high, but Akari moves with her parents to Tochigi Prefecture leaving Takaki behind in Tokyo. The two send letters and text messages heavy with young love back and forth until Takaki sets out on a long train trip through a snow storm to meet his love. He announces that he too will be moving from Tokyo, down to Kagoshima separating them from each other even more. The next episode, “Cosmonaut” picks up where “Ōukashō” leaves off, following Takaki to Kagoshima where a female classmate, Kanae, has fallen head first into unrequited love with him. It doesn’t take her long to realize that Takaki’s heart belongs to another though. The last eponymous episode finds Takaki as a young man work in an office in Tokyo. On a spring afternoon he crosses paths for a brief moment with Akari who has retuned to Tokyo to plan her wedding to another man. This is the briefest of the three episodes and quickly turns into a music video.
Now from this brief outline you’d think you were reading a romance manga, and at its heart that’s what “5 Centimetres Per Second” is: overwrought young love depicted in all its harrowing and syrupy goodness. This is definitely not my cup of tea… but what truly saves things is the often breathtaking animation on display. Once again Shinkai is the master of small detail and light, so much so that there were times when I wondered if all of the backgrounds hadn’t been roto-scoped, but apparently they haven’t. These environments are truly a joy to behold. I would have loved, though, to have seen Shinkai depict people with the same level of detail, but instead we are treated to the same doe-eyed, spiky haired anime clones that can be seen over and over again in the genre.
While it didn’t take my breath away in the same way that Mamoru Oshii’s “Innocence” did, and although it falls far short of the narrative ingenuity of Miyazaki, “5 Centimetres Per Second” is still head and shoulders above a lot of anime features being put out recently. Worth a look.
Posted by Chris MaGee at 7:12 AM