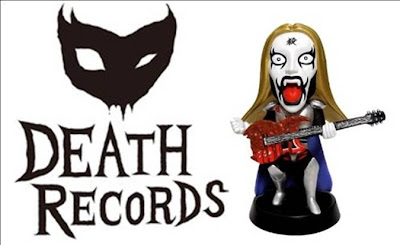 Everyone has been witness to Gene Simmons rocking out with Kenichi Matsuyama and the rest of the cast of the upcoming “Detroit Metal City”, but as the P.R. juggernaut for the rock/ comedy manga adaptation continues to pick up steam it looks more and more that its producers are taking a page from Kiss and Gene Simmons promotional mantra: more is better! Just like Kiss’s marketing of pillow cases, Kiss branded wine and the infamous/ ridiculous Kiss Casket the execs at Toho are licensing a slew of “Detroit Metal City” tie-in products. Last month Anime News Network had the word about “DMC” plush dolls, action figures, collectable figurines, plus a single with Matsuyama performing as his character Soichi with his pop song “Amai Koibito (Sweet Lover)” as well as his alter ego, heavy metal god Johannes Krauser II with “Satsugai”.

Now today we have word from both Tokyograph and Anime News Network that the fictional record label featured in “DMC”, Death Records has been turned into a real functioning company. Coinciding with the film’s August premiere the label will be releasing the above mentioned single as well as well as three other single and a full album of music by other bands featured in the film, ie: “Grotesque” and “Death Penis”, etc. Now all we need is news that they’ll be a “Detroit Metal City” tour. I would not be in the least bit surprised.
Posted by Chris MaGee at 7:02 AM